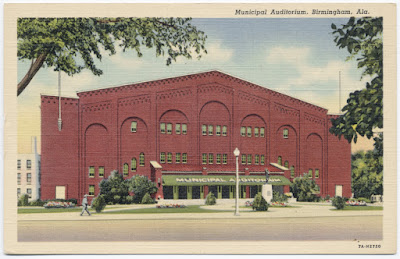 The auditorium was renamed for Mayor Albert Boutwell, a Democrat. He was elected to the Alabama State Senate in 1946, Lieutenant Governor in 1958 and Mayor of Birmingham in 1963.
Charles Lindbergh, an American aviator, (who made the first solo nonstop flight across the Atlantic Ocean from New York to Paris on May 20-21, 1927), was toasted at a banquet held in his honor at the Birmingham Municipal (Boutwell) Auditorium during his U.S. flying tour visit in 1927. [8]
The auditorium was the site of the 1938 Southern Conference for Human Welfare to discuss issues of human welfare on the way toward overcoming the effects of the Great Depression.[9] 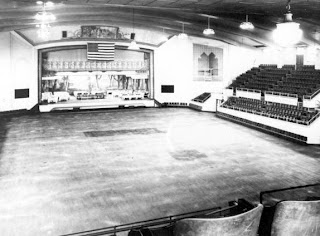 The Boutwell is one of the sites identified as important to the Civil Rights Movement and is listed among properties included in a proposal for Alabama's Civil Rights Churches to be added to UNESCO's roster of World Heritage Sites. [9]
Boutwell, formerly known as Birmingham Municipal Auditorium, was the site of a white supremacist attack. Klansmen stormed the stage and brutally attacked Montgomery native Nat "King" Cole in 1956, the white audience gasped in horror. These average local white teenagers screamed in shock as they watched policemen wrestle to the ground the white opponents of rock'n'roll. The sold-out crowd applauded the arrest of the Klansmen and remained in their seats, calling for the return of Cole to let him know they did not sanction the violence. The gracious singer came back on stage, later explaining to a reporter, "I thanked them for coming to the show and told them I knew they didn't hold with what had just occurred. I noticed some people were even crying."[2] 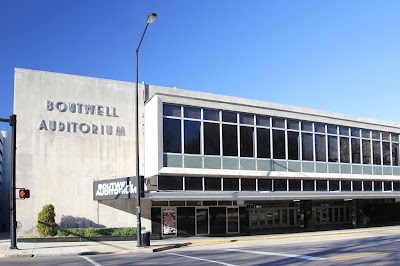 12/15/78 Grateful Dead
I:The Promised Land;Shakedown Street;New Minglewood Blues ;Friend Of The Devil;El Paso;From The Heart Of Me;Brown Eyed Women;Cassidy;Deal
II:I Need A Miracle>Bertha>Good Lovin';It Must Have Been The Roses;Lady With A Fan>Playing In The Band>Drums>Space>Stella Blue> Truckin'>Playing In The Band. Encore:U.S. Blues
https://archive.org/details/gd78-12-15.sony.wiley.9479.sbeok.shnf
Promoter John Scher in association with Tony Ruffino and Larry Vaughn.
Jerry plays the Travis Bean 1000A #715 guitar.[7][10]
"The staff at Boutwell said they sold out of beer (120 kegs) before the first set was over. It was the first time beer had ever sold out at Boutwell."[5]

"During the Stella Blue sung verses, it feels like it's just Garcia and Keith at a tiny nightclub.
His voice couldn't be more earnest."[6]

4/28/80 Grateful Dead
I:Alabama Getaway>The Promised Land;They Love Each Other;El Paso;Althea; Looks Like Rain;Tennessee Jed;Far From Me;Feel Like A Stranger;Deal
II:China Cat Sunflower>I Know You Rider;Samson And Delilah;He's Gone>The Other One>Space>Drums>Space>Black Peter>Sugar Magnolia
Encore:Goin' Down The Road Feeling Bad
https://archive.org/details/gd80-04-28.fob-nak700.non-dank.3402.sbeok.shnf
"I met Jerry and Bob out behind Boutwell before the show, they signed our copies of Go To Heaven we had just picked up down the street, and hung around out behind the venue chatting and allowing photo ops. We then snuck in to the room to watch Phil set up and play solo for a while. He stopped to chat with us from the stage and was equally friendly and interested in hearing from us tour folks."[3]

Posted by Jerry's Brokendown Palaces at 12:30 PM No comments: