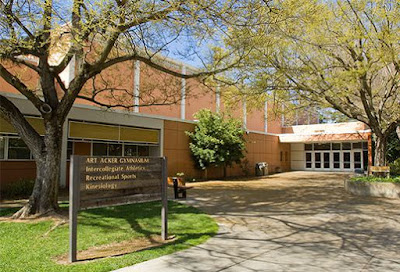 Originally constructed and completed in 1961 and named for Art Acker. Acker came to Chico State in 1923. He was a basketball coach at Chico State who lead the Wildcats to the Far Western Championship victory in 1937. He coached every sport at Chico State except skiing and wrestling.
The building was recently renovated with new flooring, seating, and sound system.

3/17/82 Jerry Garcia Band
I: How Sweet It Is; Catfish John; Simple Twist Of Fate; Let It Rock; Sitting In Limbo; Mystery Train
II: Sugaree; I'll Take A Melody; Tore Up Over You; Russian Lullaby; The Night They Drove Old Dixie Down; Dear Prudence; Tangled Up In Blue
Jerry plays the guitar, Tiger. Dave Torbert fills in for John Kahn for the first set.

For many years it was thought that this show was held at Laxson Auditorium.
Posted by Jerry's Brokendown Palaces at 8:36 AM 6 comments:

Eight years ago I began writing The Encyclopedia Of Jerry Garcia Music Venues. It's the only book that combines all of Jerry's side band dates and the Grateful Dead's dates together by venue.
Alphabetically by state, there are 1298 venues that include rehearsal, recording, performance, living spaces and planned/canceled show venues.
The history of each venue is here including architects, builders, owners, opening night performances and other notable appearances, murals, statues, stage prosceniums, backstage areas, pipe organs, secret rooms, hidden tunnels, restorations and demolitions.
Jerry's history at each venue includes the bands he played with, set lists, opening acts and other information giving the reader an idea of what went down at every date on every tour. In many cases via dated photos, what guitar Jerry was playing, and other anecdotal stuff that we love to read.

I've added eye witness reports to as many specific dates as possible. These are numerous, hysterical and heartwarming.

There are thousands of footnotes for verifying all the information.

Thus far I‘ve collected over 920 hi res venue photos approved by over 900 photographers. I've utilized college and public library special collections, historical societies, museums, Flickr and others. Only about 75 more photos to locate! There aren't any Jerry photos, just photos of the venues themselves, and in some cases, Deadheads. Well, there is one of Jerry at Place Ville Marie, Montreal, 8/6/67. He's got a thin leather headband on. No one's seen this one as the photographer thought she was shooting the Jefferson Airplane, who also performed for free that day.

Jerry owned over 115 musical instruments in his lifetime, giving away most of them. Each is documented with hi res photos.

Envision a large book, similar to an old bible. This is a book that resembles the records kept for medieval pilgrimages to holy sites. People will want to know centuries from now where it all took place...so there ya go.
To add your most unique, wildest memories of a specific Garcia performance to this book, please send them to slipnut01@gmail.com.
Self publishing printed hard copy in July, 2018.