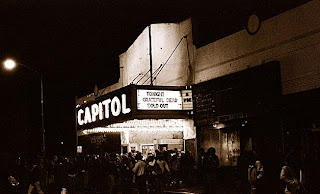 Capacity 3506[19]
The Capitol was built by Samuel Harris, a Passaic businessman.
Abram Preiskel was the architect of both the Capitol and Montauk Theaters in Passaic. He was a co-owner of the Capitol (with Harry Hecht) at least during part of the 1930’s.[31] The original blueprint of the proscenium arch states C.A. Sandblom, Architect, 19 West 45th Street in Manhattan.[32]
Built in 1926 as a vaudeville house, the Capitol later served as a movie theater and (after John Scher bought the property) a venue for rock concerts.
While the Capitol Theatre was being built in 1926, the owners ran out of money and were unable to include stage facilities, so the movie screen was erected flat against the auditorium's back wall. 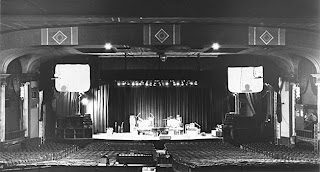 Was purchased on 12/16/71 by John Scher, a young concert promoter. He wanted a theater that could make NJ the rock capital of America. With the closing of the Fillmore East in Manhattan he made his move in the NJ market. He continued the Fillmore's innovative tradition of showing cartoons and film clips between performances.

Both Jerry Lewis and the 3 Stooges made appearances at the Capitol in the early sixties when they were promoting new films. My brother saw the Stooges for HAVE ROCKET, WILL TRAVEL and a friend saw Lewis for THE NUTTY PROFESSOR.

Regarding style, the theatre was a plain brick box on the outside, quite comfortable in its industrial context. Inside, however, the theatre was a huge, asymmetrical room with no visual interference between the stage and any seat. No balconies. The style was an interesting mixture of Deco and Nouveau--all original when we arrived, and we kept it in tact until the fire that destroyed the place.

The most unusual design element was the fact that all interior walls were covered with 2 inches of painted acoustical padding. The sound there was absolutely wonderful for live shows. Unbeatable, in fact.

Aside from the music, John Scher also presented everything from Mr Jiggs (who really did have her teeth and really did spontaneously escape from the theatre during her performance), small circuses, dog-and-pony shows, an evangelical mission, and even some genuine vaudeville in the form of striptease. We did anything and everything that might pull an audience past the ticket booth.

The venue was known for it's in house video system which resulted in a number of good quality, black and white video bootlegs.
The Capitol Theatre closed in 1986, and was put up for sale.  After it closed, the building fell into disrepair. Soon afterwards, it suffered from a fire and was demolished in April 1991.
The Capitol Mall is now located on the property. 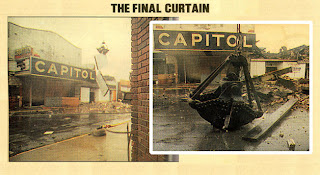 4/5/75 early and late Legion of Mary
Promoter John Scher Presents.
Early show-"John Scher introduces the band as Legion Of Mary before Tore Up Over You."[8]
Attendance for early show-3201
Attendance for late show-2260

6/19/76 Grateful Dead
Promoter John Scher Presents.
WNEW FM Broadcast
Jerry plays a Travis Bean guitar.
"After the last song, the band left the stage & the crowd would not stop screaming, I mean it was deafening. Now it was 30+ years ago, but my recollection is that the roar continued for 15+/- minutes. The house lights went up and the noise got louder. Then the crew came out and started taking down the band's equipment, and the crowd sounded like a tornado. WOW, we were freaking out. The drums were torn down, lights up full-blast, and the crowd knew there was more...and they were right. Out strolls Jerry, guitar and microphone in-hand, the crew was startled and the audience went nuts. Billy & Mickey carried their drums back on stage and started the hypnotic beat to NFA. Really cool. We were in heaven, and 10 minutes later everyone was exhausted from the dancing. We went home and we were thankful to have attended such a remarkable show, capped off with magical mayhem."[2]

4/25/77 Grateful Dead
Promoter John Scher Presents.
Jerry plays the Travis Bean 500 #12 guitar with The Enemy Is Listening sticker.[12]
"This theatre was so much fun to see the band play in. I remember Jerry kept on pulling a vial from his boot and doing a toot several times throughout the night.
I hung out right at the rail behind the soundboard. Decent night. I was delighted to hear my 1st "US Blues". Our car got broken into."[3]

The second song of the early show is "They Love Each Other", which has a fascinating Close Encounters theme  tucked into it.
In the late show, some Fire On The Mountain themes are played in Lonesome And A Long Way Home.[20]

"My first show. It was a sold-out show at the Capitol Theater in Passaic, NJ. My boyfriend at the time assured me we'd get in without tickets. They had been sold by mail order and were a shiny silver. We searched and searched. It was freezing. The boyfriend went back to the car for something, and I told him I'd be behind the theater (less wind). After what seemed like forever, the backstage door popped open. A guy came out and asked why I wasn't inside and out of the cold. I explained that we hadn't found tickets yet. He pulled two out of his shirt pocket, smiled, and said, 'Enjoy the show!' It was a great beginning!”[33]

3/30/80 Grateful Dead
Promoter John Scher Presents.
Lottery for tickets: "Private, for Deadheads Only"
"Eyes closed (watching the colors), just as I discern an extra voice on the chorus of US Blues, my buddy Bob elbows me in the ribs. So when I open my eyes, I look at him instead of the stage.
His eyes wide and pied, he says, "That's John Belushi"!
Belushi went on to do cartwheels (nicely punctuated by Billy) during Jerry's lead, and sing on the chorus/coda."[1]

4/1/80 Grateful Dead
Promoter John Scher Presents.
Lottery for tickets: "Private, for Deadheads Only"
April Fool's Promised Land: Bobby on keyboards, Brent & Jerry on drums, Billy on bass - Mickey on rhythm guitar and vocals, and Phil on lead guitar. Then they came out and did it again - the "right" way.

“My high school history teacher was Becky Weinberg( Max wife). She got me John Schers personal ticks. Front row Center Capital 4/1/80. Now front row thete my knees touch stage. 17 yo tripping and closest person Jer. All night he looked at me knowing I was in zone. Black Peter he was looking right at me helping me along w my trip. These days I work 10 hrs day working in medicaid clinic. Go home. Like worker bee part of hive. Longing for what was.”[30]

6/24/82 early and late Jerry Garcia Band
Promoter John Scher Presents.
"After the show, my buddy and I were trying to find our car. As we walked along the side of the joint, a huge  door swung open and the band piled out. They started climbing in a van, we told them how awesome they were and Jerry said, thanks for coming out as the door slammed shut and off they went."[5]

"I saw Jerry and John Kahn twice in one night during a two-man acoustic show (with Hunter opening up) in New Jersey at The Capitol Theatre in the fall of 1984 and he was in truly awful shape then. His calves were too large for his black corduroy pants! His chin was glued to the top of his chest and I swear to God I think he fell asleep momentarily. On stage. He never said a word to the audience. The vibes were bad."[25]