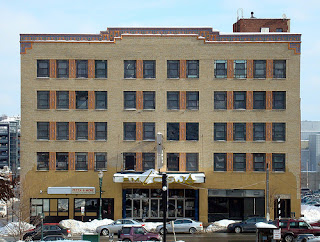 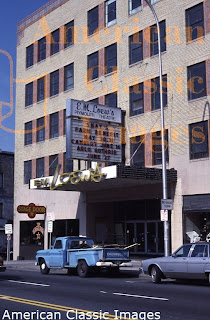 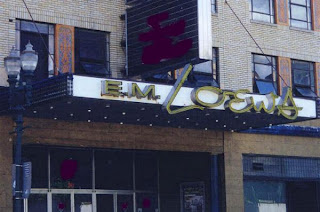 The theatre opened as the Plymouth Theatre on November 24, 1928. According to the Encyclopedia of the American Theatre Organ it did have a 2/8 Robert Morton organ. The newspaper article on the opening identified "Buddy" Webber at the console of Our Mighty Organ.
A venue for mainly movies and vaudeville performances.
Operated by Alfred Gottesman who sold out to Warner Bros. in 1929.(3)

The theatre then had a rectangular marquee with white letters on a black background. Attractions were “This Thing Called Love” and “Dangerous Game”. There appears to be a ticket booth in the center under the marquee. The street in front consists of cobblestones and also trolley tracks. The Report says the Plymouth is on Main St.,that it has been playing MGM product for over 10 years; is over 15 years old (in 1941) and in Fair condition. Seating is listed as 1400 on the main floor and 1200 in the balcony, total: 2600. (these figures were probably rounded up.) Competing theatres are listed as the Olympia (Art), and the Elm Street. Worcester’s population in 1941 was 193,000.

Nate Goldberg, manager of the Plymouth, discovered a Worcester GI played an extra in a scene for “Paisan” and capitalized on it, the story hitting page one of the dailies when the picture played the Plymouth. It became the  E. M. Loew Center for the Performing Arts on April 14, 1980 and the Palladium after that.(1)

"I am the janitor of the Palladium in Worcester, MA. It holds 2160 patrons, not 2633. It is a wonderful place to work for a lover of older architecture. I will never tire of caring for my old theatre. The original chandelier from its movie palace days still lights the balcony. The bowling alley in the basement is long since defunct. Most of the old marble, (stairs, walls) is still intact. Though long unused, the screen is still perched high above the stage. My old theatre is still alive and kicking and I do love it dearly."(8)

It's hand-painted architecture stands the test of time and can be still seen to this day. The velvet curtains, elegant columns, and central chandelier were all common in theatres during the early twentieth century, but it would be rare to see such detail put into a chain movie theatre being built today. Besides the Palladium’s main theatre hall, there were offices upstairs that housed dentists, dance studios, and a foot support company, and in the basement there once was a bowling alley. The main theatre went through its’ club stages, endured multiple renovations, and today has a two bars - one downstairs and one upstairs. The downstairs theatre serves as a live concert venue for mainly non-mainstream and/or up and coming bands of multiple genres and the upstairs is mainly reserved for small acts or local bands. (Adam Straughn)

There is a balcony which is rarely seen open, but the main area is tiered to allow for better viewing. The main floor is on the smaller side, but just makes the venue feel more informal. There is no AC, no ventilation.