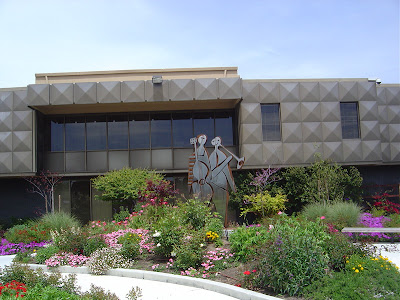 Fantasy Studios
In September of 1967 Saul Zaentz and partners acquired ownership of Fantasy Records, and in 1969 Fantasy purchased the property located at Tenth and Parker Streets in Berkeley from Peterson Trucking Company. They began building the first portion of the complex that was to house Fantasy Records and included three recording studios that still stand today.
In 1971 Fantasy relocated from 30th and Peralta in Oakland to its current location in
Berkeley and the original building, now referred to as the "annex" was only
two-stories. 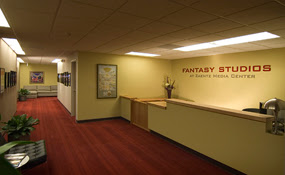 In addition to a lobby area, the building included three recording
studios, as well as a sauna, an exercise room and a lunchroom, which until 1981
was catered daily by Narsai's Restaurant in Kensington.

Each of the rooms served a specific purpose. In terms of recording space, Studio
A sprawled to 28x48 feet, with two isolation booths and its own private lounge
making it an ideal space for larger bands. Cannonball Adderley's "Big Man
Opera" was recorded in A along with Woody Herman's "Herd." Studio A was also
equipped with a projection booth, a pull-down screen and a portable mixing
board that was built specifically to accommodate Fantasy's film unit. "One Flew
Over the Cuckoo's Nest" and "Apocalypse Now," among others, were mixed in
A.

The mid-sized Studio B offered one isolation booth, which doubled as a lounge,
making for an affordable overdub option. It was considered more intimate and
used mostly for smaller acts and comedy records.

Studio C, another large space, featured a 24x37 foot main room, private lounge,
bathroom and kitchenette. It was built for Creedence Clearwater Revival and is
where the band recorded parts of Mardi Gras and Pendulum, as well the trio's
"live" recording (CCR1). John Fogerty recorded "Blue Ridge Rangers" in C also
and was in residence there until he left the label in 1974. Studio C was also the
site of a film soundstage and Foley pits, which could also be used as music
recording spaces.

Jim Stern, producer for the Sons of Champlin and Van Morrison, was chief
engineer from 1974 until 1980. Jesse Osborn, who had been an engineer at
Fantasy when it was based in Oakland and who had worked artists such as Baby
Huey, was one of the early studio regulars along with Eddie Bill Harris and Don
Cody. The traditional 70's method of getting into the studios was to start off
working in the warehouse, graduate to tape transfers and then eventually move
up to second engineer status. This was the path for Phil Kaffel, Wally Buck and
Danny Koppelson among others. Throughout the 70's the studios acquired a
growing cache of microphones and outboard gear making it the best collection
of that kind of equipment outside of Los Angeles at the time.
In 1980, Fantasy Studios expanded from three rooms to four rooms and opened its doors to outside clients for recording, mastering, and film scoring. The new
studio D, designed by Tom Hidley and constructed by Sierra Audio, offered an
automated Neve 8108 along with Hidley monitors and an assortment of Ampex
16 and 24 track recorders, a Studer 24-track, outboard gear, and a closet of
more than 164 microphones.

Audio pioneer George Augsberger made several trips to the studio to suggest as
how to get the best sound out of the rooms. The walls were built parallel as they
had not been specifically designed by a sound engineer, but eventually bass
traps and sound deadening was installed. Inspired by legendary Abbey Road
Studios in London acoustic tile was also glued to the walls. However, it wasn't
until Roy Segal took over the studios in 1981 that the rooms were redesigned
and brought up to a more correct audio standard.

In 1982, the owners of Fantasy asked Roy Segal to head up the three-year-old
Saul Zaentz Film Center, at which point he brought in Nina Bombardier to
manage the studios. Nina acted as studio manager through 2007.

In the 90s Fantasy Studios was the place for everyone from Santana to Green
Day record.  It was here that Santana overdubbed a large portion of
Supernatural. He also returned to Fantasy in 2001 to record parts of Shaman
and again in 2005 for All That I Am.

Though the post-production mix stage known as the Saul Zaentz Film Center
closed in January, 2005, Fantasy Studios continued to bring in steady
post-production and ADR/Foley recording. It hosted post sessions for Jarhead,
Cassanova, Art School Confidential, and Grizzly Man as well as voice over work
from Pixar Studios, located only a couple of miles away in Emeryville.
In late 2004, Concord Records Inc. acquired Fantasy Inc., and the two labels
merged to form Concord Music Group. Concord Music Group managed the
studios through 2007, at which point the new owners of the Saul Zaentz Media
Center, Wareham Properties bought the studios and took control in January of
2008.

In its 35-year history, Fantasy Studios has expanded both its external structure
and internal contents. By keeping its original foundation intact, Fantasy has
weathered the industry's highs and lows and stands in a position to remain
strong in the years to come.

This complex jouses some of the finest post-production film facilities in Northern CA and the best recording studios in the Bay Area. Fantasy remains the country's largest independent label.

Fantasy Records
During the 1940s brothers Max and Sol Weiss operated a San Francisco plastic molding business that included a record pressing plant, one of whose early clients was pianist Dave Brubeck. Due to the local success of the Brubeck discs, the pressing plant metamorphosed into a label, which the Weisses named Fantasy after a science-fiction magazine.
In 1968, a year after a group of investors headed by Fantasy sales manager Saul Zaentz purchased the company, Fantasy began hitting platinum many times over with the rock band Creedence Clearwater Revival.

Based in Berkeley since 1970, Fantasy continued its success with such varied artists as the Blackbyrds, Stanley Turrentine, Sylvester, Ruth Brown, and Freddy Cole, as well as with the best-selling Amadeus and The English Patient soundtracks, and is today the country's largest independent label.
In the early 70s, under the leadership of label president Ralph Kaffel, Fantasy
purchased the catalogs of three of New York's top jazz independents: Prestige
Records, Riverstone Records (established in 1953 by Bill Grauer and Orrin
Keepnews) and Milestone Records, which Keepnews had started up in 1966
after the demise of Riverside. During the 70s, Keepnews joined Fantasy as a
producer and helped build up a major jazz recording program at the company
including Bill Evans, Sonny Rollins and Cannonball Adderley.
In 1977 Fantasy went on to acquire the catalog of another legendary independent, the
Memphis-based Stax Records (and affiliated labels Volt, Enterprise and Gospel
Truth), which since 1960 had been producing contemporary soul masterpieces
by artists like Isaac Hayes, Johnnie Taylor, the Dramatics, the Staple Singers
and Albert King. The boost to the Fantasy catalog in the 1970s led to an
extensive reissue program for the work of Miles Davis, Thelonious Monk, John
Coltrane and the Modern Jazz Quartet, among others.

Galaxy Records
Like its parent company, Fantasy Records, Galaxy was named after a science-fiction magazine. The subsidiary was launched in 1951 as a vehicle for jazz. It has undergone many changes and periods of dormancy, but sprang to life again in 1977 with a roster that included Tommy Flanagan, Red Garland, Johnny Griffin, Hank Jones, and Art Pepper.

Debut Records
Founded in New York in 1952 by bassist/composer Charles Mingus, in association with wife Celia, drummer Max Roach, and others, Debut Records was a valiant attempt by jazz musicians to control their own music. Charles and Celia Mingus separated in 1958, and she soon settled in San Francisco, where she went to work for (and eventually married) Saul Zaentz of Fantasy Records, which acquired the small-but-mighty Debut catalog.

Kicking Mule Records
Founded in Berkeley, California in 1971 by ED Denson (formerly of Takoma Records) and guitarist/educator Stefan Grossman, Kicking Mule Records served as a major impetus in expanding the limits of steel-string guitar playing. In 1995, the label was acquired by Fantasy, Inc.

Among the wide range of artists who have recorded at the facility include David Bowie, U2, Santana, Grateful Dead, Chris Isaak, Sonny Rollins, Bill Evans, Vince Guaraldi, The Buzzcocks, Green Day, En Vogue, Journey and INXS.

This was Merl Saunders home away from home. Colorado Exile was one of many albums he played on...by Friend and Lover., at Fantasy.
Despite the Top Ten success of "Reach Out of the Darkness," the LP didn't make the chart at all. Post and Conn would later divorce, and by the early 1970s Post was recording as a solo act. "I put Colorado Exile out on Fantasy Records," he says. "It went on 200 stations in the first week, and they dropped the ball completely. John Denver didn't happen for another six months. I was really on that wave, and Colorado Exile has some nice stuff in it for that era of music, especially 'Colorado Exile,' the song. I will tell you a great mistake I made on that album. Merl Saunders was playing for me, and he said to me, 'I played the work tape for Jerry Garcia, and he wants to play on your album.' And I said, 'Well, I already have a guitar player,'" Jim laughs. "I wish Merl would have said, 'Hey Jim, don't you understand what's being offered here?' If I'd have known Garcia was such a folkie...one of my favorite albums is Old & in the Way [the early-'70s bluegrass album featuring Garcia and David Grisman]. After Colorado Exile, I gave up on [Fantasy]. After Fantasy, I just gave up on commercial music."


Jerry performed here in
8/21/70 Brewer and Shipley
When Brewer And Shipley needed a pedal steel guitar player, they went down the hall and asked Garcia, who obliged them on August 21, 1970 by playing on two tracks ("Oh Mommy" and "Fifty States Of Freedom"). The recording of the two songs would have been the first time Garcia and Kahn appeared on a track together, although they were not likely to have been in the studio at the same time (only Garcia's part on "Oh Mommy" was used). (lost live dead)
1971-1975 Merl Saunders (Keepers)
10/72 Tom Fogerty (Excalibur)
1972 Merl Saunders (Heavy Turbulence)
1973 Merl Saunders (Fire Up)
1/12/74 Merl Saunders (Mystery Train, That's All Right, La-La, Bolinas Brown and Gee Baby Ain't I Good To You)
1974  Merl Saunders  Bill Vitt  Tom Fogerty  David Grisman  Vassar Clements  Mike Bloomfield  Martin Fierro  Sheila E.
Early 1990 Country Joe McDonald (Carry On)
1/91 Country Joe McDonald (Superstitious Blues)
?/?? Kingfish (Sundown On The Forest)
6/95 Smoke movie soundtrack (also see Clinton Studios)(4)

Email ThisBlogThis!Share to TwitterShare to FacebookShare to Pinterest
Labels: F-Venues