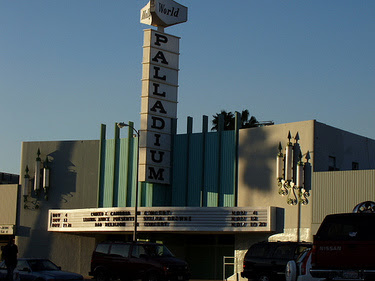 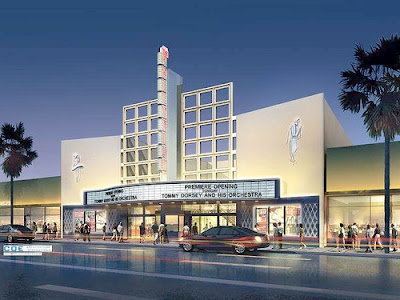 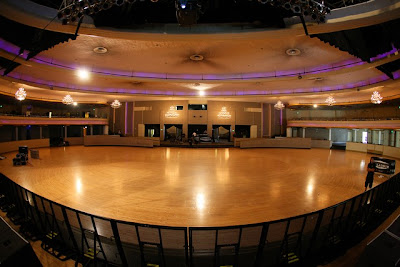 Located between Argyle and El Centro avenues, the Hollywood Palladium was built by film producer Maurice M. Cohen, on the site of the original Paramount Pictures. The Palladium was down the street from CBS Columbia Square and across the street from Earl Carroll's theater. It was built in a Streamline Moderne,[1] Art Deco style and includes an 11,200 square foot (1040 m²) kidney shaped maple wood dance floor with room for up to 4,000 people. The Los Angeles Times publisher Norman Chandler funded the construction of the art deco Hollywood Palladium at a cost of $1.6 million in 1940.[2] There was cool lighting and special illumination devices creating color symphonies played on a color keyboard that worked in harmony with the music.  It had a unique circular dome-top cocktail lounge.

There were chandeliers and chrome and swooping lines and colorful accent lighting.
The venue could accommodate 7,500 people - and there were no built-in seats.  There was dining for 1,000 around the dance floor.
The style dance hall was designed by Gordon Kaufmann, architect of the Greystone Mansion, the Los Angeles Times building and the Santa Anita Racetrack in Arcadia.[1] He was also the architect for the Hoover Dam and early Caltech dorms.[3]

It opened September 23, 1940, some say it was October 30, 1940, with a concert by Frank Sinatra and the Tommy Dorsey Orchestra. Actress Lana Turner and her then-husband, bandleader Artie Shaw, showed up for the event. It had six bars serving liquor and two more serving soft drinks and a $1 cover charge and a $3 charge for dinner.[3] 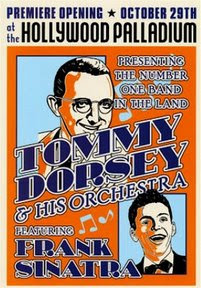 Throughout the 1940s and beyond, movie stars including Rita Hayworth and Tyrone Power along with fashionable couples, dressed for a night on the town, hit the dance floor, jitterbugging under a sky-blue ceiling with tiny stars to the music of Shaw, Dorsey, Glenn Miller and Benny Goodman.
During WWII, the Palladium hosted radio broadcasts featuring Betty Grable greeting servicemens' song requests.

From 1955-1976, this was the scene of Latin Music Orchestras for dances sponsored by radio personality Chico Sesma, titled "Latin Holidays". The Tito Puente Orchestra performed regularly between 1957-1977 to sold out houses of 5000.[4]

In 1961, Lawrence Welk broadcast his long running TV show from the facility. 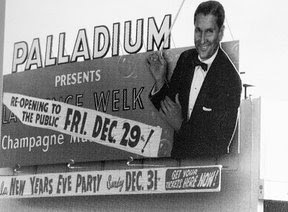 On November 18, 1961, President John F. Kennedy took the occasion of a Democratic Party dinner at the Hollywood Palladium to speak out against ultra-conservative organizations.

In another JFK appearance this happened!


In 1964 the Teen-Age Fair moved the the Hollywood Palladium. The fair was from noon to midnight. Admission was $1.50.
The Teen Age Fair was a 10-day long event. It promised  hundreds of activities of special interest to teen-agers, including: surfing clinics, hot rod displays, outdoor amusement rides, midway with all the carnival booths, dance contest, a car bash and cramming contest,  yo-yo championship,  Karate exhibition, skydiving and surfing films upstairs in the balcony. The big highlight of the fair was the annual  Miss Teen U.S.A. pageant and the Battle of the Bands competition.

In 1964, it was announced that none of the jazz bands scheduled were to be paid and a riot ensued after the show was cancelled.[3]
This winners of the 1965 Battle of the Bands was Captain Beefheart and his Magic Band.

In February 1965, Rev. Martin Luther King was honored at the Palladium by city officials recognizing his Nobel Peace Prize. A bomb threat was called in for the event, frightening the attendees. Earlier in the day, LA Police had found 1400 pounds of explosives in a Los Angeles apartment.

In 1968, Lawrence Welk did his show from here every Friday and saturday evenings.

Pop Expo '69, referred to as a "teenage fair," was a youth-oriented event held from 3/28/69 to 4/6/69 at the Palladium, and included performances by the Jimi Hendrix Experience and the MC5. There was still the usual bombardment of  games, tents, carnival booths and rides. This time there was a psychedelic whale ride, a loud motorcycle pit and a psychedelic light show.
The fair tried to bill itself as a Celebration of Life  and  Renaissance of the Arts.  Amongst all the strobe lights and loud rock music,  teenagers could  learn about the Peace Corps, watch abstract student films, track their personality, and test their knowledge about VD.

In 1970 the Palladium recieved a complete facelift. Gone were the dangling sparking stars that hung in the ball room hall. Now there were eight huge Viennese leaded crystal chandeliers. The main ballroom now is known as the Room of the Presidents, since Presidents Truman, Eisenhower, Kennedy, Johnson and Nixon have all been entertained there.


Now the dominant colors are lacquer red and old in the main ballroom also got new curtains in metallic gold, bright red and shell pink for a three dimensional effect on the stage. Draperies encircling the room are in soft gold with wallpaper in the ballroom and entry foyer repeating the same colors.

The adjoining room know as the VIP Room, where cocktails or smaller dinners and receptions are held, are now quipped with special facilities for press, television and radio interviews for the many celebrities who come to the Palladium.  Here there is antique gold and pale green, gold leafed mirrors and crystal basket chandeliers for added elegance.  Recessed areas in the walls hold original oil paintings of the US Presidents for whom the ballroom is named. (source: L.A. Times article)
In the 1970's the Palladium became the perennial home of the Emmy Awards, the Grammy Awards and the Country and Western Music Awards. Every US President from Harry Truman to Richard Nixon

has enjoyed the hospitality of the Hollywood Palladium. 1971 the Grammy Awards were televised for the first time.  (source: L.A. Times article)

On March 20, 1972 it was Wilson Pickett, Curtis Mayfield, and War. After the concert on MARCH 20th, a 16 year old boy was stomped and beaten to death by a gang of youths across the street from the Palladium. The youth had refused to surrender a leather jacket he was wearing. Four of the assailants got life sentences. 1972 was the year that Los Angeles became aware that it had a gang problem.

In 1973 Stevie Wonder performed with Taj Mahal in what was advertised as an "Afrocentric concert" to benefit African refugees.[3]

The Hollywood Palladium is featured in a movie as the Concert Scene at the end of the "The Blues Brothers" (1980) and the film "Almost Famous" in the scene where Penny Lane dances to the Cat Stevens song "The Wind".

Since 1985, the theater has been owned by Palladium Investors Ltd., a privately held group.

Beginning in the 1980s and 90s, punk rock, rap and heavy metal concerts started to be booked at the venue. Several white power disturbances resulted, eventually leading to the Palladium closing for eight weeks, starting in February 1993.

In 2007, the owners agreed to a long-term lease to operate, manage and exclusively book the Hollywood Palladium with Live Nation, a Los Angeles-based company.[6]
The Palladium reopened with a Jay-Z concert on October 15, 2008[7] after a year long, multi-million dollar renovation by Live Nation. The renovation included an overhaul of the venue's interior and exterior, a new dance floor, expanded concessions, upgraded restrooms and improvements to the stage infrastructure. Jay-Z performed for nearly an hour-and-half, backed by an eight-piece band and DJ AM, who played his first show after surviving a plane crash in South Carolina.[6] The Hollywood Palladium was also used as the memorial service site for DJ AM on September 3, 2009.[8] 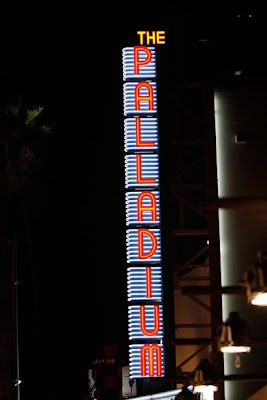 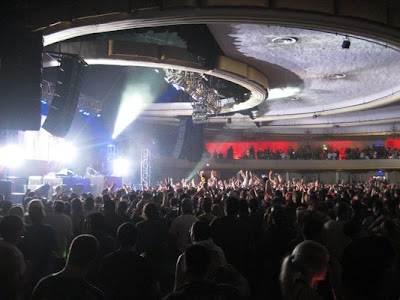 
Posted by Jerry's Brokendown Palaces at 9:26 AM

Email ThisBlogThis!Share to TwitterShare to FacebookShare to Pinterest
Labels: H-Venues