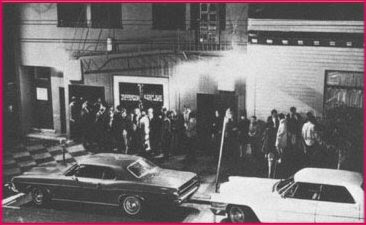 The Matrix, San Francisco’s first folk night club, opened by Marty Balin and his father, in the Marina District on August 13, 1965. Marty had persuaded three limited partners to put up $3,000 apiece to finance the opening of The Matrix, giving them 75% ownership, while he retained 25% for creating and managing it.[3] It was actually a pizza parlor that served beer, rather than a bar per se, and dancing was not actually allowed (by law).(1)
Until Jack's arrival, the Airplane had confined their performances almost exclusively to the Matrix, with one exception. The club had been designed with them in mind, they were able to fill the room to capacity each time they played (which wasn't that difficult as the legal limit was under 300–more often than not there would be twice as many bodies crammed inside), and they liked the place. The band was able to rehearse there during the week without having to set up and take down its equipment each time. Being the house band was ideal for them.

"The Matrix was a crummy little closet of a venue with barely enough room for 50 to 60 people to stand in, the big name bands didn't play there after they got up and known. The hall couldn't pay more than $100 for the act. They seldom had two acts/night and so far as I know never three."-Owsley Stanley

Since it was originally created and run by musicians, The Matrix was always popular with local and visiting musicians, so, on their off nights, many of them would come there to hear other groups they knew or just to hang out. Known musicians never paid a cover charge.

As the Airplane's reputation spread, there was more of a demand for their services and, like any new band, they needed all the work they could get. The most pivotal of the first outside gigs was undoubtedly the one that took place October 16th at Longshoreman's Hall, at San Francisco's Fisherman's Wharf, dubbed by its comic-book-loving promoters "A Tribute to Dr. Strange." Also featuring the Charlatans, the Marbles and the Great Society, the event was presented by a four-person collective calling itself the Family Dog, who took their name in honor of Harmon's recently deceased pooch and lived together in a communal house on Pine Street.

It was that last part that hit home with the Airplane. Their music was meant to be danced to, and this nonsense about no dancing being allowed at the Matrix was awfully frustrating.

In the early years of The Matrix, there was a huge mural of the Four Horsemen of the Apocalypse on the left wall near the rear; rumor was that the members of Jefferson Airplane painted it before the club first opened (appropriate, since these four horsemen all carried musical instruments). The mood the mural conveyed was sort of in keeping with the very subdued lighting everywhere in the club other than the small stage.
The entrance was recessed about two feet and was left of center on the windowless wall seen from the street, but there was a movie-poster-like cabinet outside to the door's right, where upcoming bands were listed and handbills were posted. Inside, near the entrance, there was a bar (beer and wine license only) on the front left. The interior was about 40 feet by 80 feet. The front third of the club had about a 10-foot-high ceiling, but farther back, it went up to about 20 feet. The right front area had chairs and most of the cocktail tables, while the center to rear of the room was a dance floor. The stage was a step above the floor on the right side, center to rear. A small sound booth occupied the center of the left wall, and a few cocktail tables were at the left rear in front of the mural. The rear wall had a window opening for the small galley used to prepare bar food and other snacks.
Elliot Sazer: When people tried to start dancing, the police would stop them. You're not allowed to dance in San Francisco, unless you're in a hotel or the place has a special dance permit. And for a very liberal town, this was the craziest law I'd ever heard of in my life.

Sometime in 1966 or 1967, Marty Balin sold his share of the club to Peter Abram and Gary Jackson, two of the original partners.[3] Peter actively managed the club room and did bookings while also recording any musicians who were well-known or that he enjoyed or who were recommended to him. Gary took care of accounting and general business matters. For a brief period towards the end of 1966 Bill Ehlert, better known as The Jolly Blue Giant or simply Jolly, owner of the Jabberwock in Berkeley took over running the Matrix for a couple of months. This saw a distinct change to the booking policy where Jabberwock favourites Country Joe and the Fish, the New Age, and Blackburn & Snow would perform at the Matrix. Another change was seen in the advertising of shows, where Jabberwock house artist Tom Weller would provide some great posters and handbills.

Joe Buchwald: Marty was always the one who instigated, "C'mon, get up and dance." He'd work
the crowd up into a frenzy and then they'd all rush forward to the stage and that's when all that commotion started.

Alton Kelley: We threw six or seven dances before we even knew we had to have a permit. The city tried to shut it down but once it was happening there was no shutting it down.

The Matrix continued to showcase local and visiting bands for a few more years. It was always a hangout for local musicians, famous or otherwise, both because of its history and because of the owners' respect for serious musicians. The club closed in 1972; although briefly re-opening at a new location (412 Broadway - previously "Mr Ds") in the fall of 1973.
When The Matrix closed, a nearby bar, Pierce Street Annex, leased the space and moved in, remodeling once again, turning it into a nightclub with only a DJ, and no live music. After the Pierce Street Annex closed, Mayor Gavin Newsom's company, PlumpJack Group, took over in 2000 and renamed the space MatrixFillmore.[6] Live music was incorporated into the venue during the first few years; however, this was not a viable venue for live music and the program was dropped.


Posted by Jerry's Brokendown Palaces at 9:00 AM