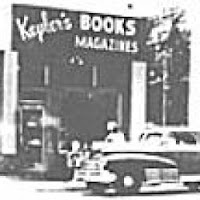 Kepler's was founded in May 14, 1955 by peace activist Roy Kepler, who had previously been a staff member of the Berkeley listener-supported radio station KPFA.. The store soon blossomed into the cultural epicenter it has always remained. It attracted loyal customers from the students and faculty of Stanford University and from other members of the surrounding communities who were interested in serious books and ideas.

"Palo Alto always had a well-to-do liberal contingent, but not many activists," Ira Sandperl says. "In those days, Kepler and I were probably the most active radical pacifists, and we 'got it' all the time from people who didn't agree with us. It was only later in the movement, when the violent activists came, that they looked back on us with appreciation," he says with a hearty laugh. "Roy Kepler was the most extraordinary fellow I've ever met anywhere. I've never met a man so committed, with so much dignity and intelligence, who was also almost completely nonjudgmental. He got along with everybody, and that's one reason everybody hung out at Kepler's."
The area's most famous pacifist, however, was Joan Baez, who in 1960 was not long out of Palo Alto High School and already making a name for herself as a singer of both traditional folk songs and contemporary protest anthems. "She was absolutely marvelous," Sandperl says. "She was very young still, but from the day I knew her, which was from about the age of 15, she had this public poise that you could not believe. When we met — I gave a talk at Palo Alto High School — I had no idea that she sang or anything, but already it was clear that her fellow girl students mimicked everything she did; whether they knew it or not, I don't know. She'd wear a cut-off sweat shirt for a blouse and the next day everybody would have them on. She was very magnetic and totally delightful." And, needless to say, a great asset to the Peace Center and its activities. Whenever she was in town, which became more infrequent after she moved to the East Coast and as her popularity grew, she'd always stop in at Kepler's and the Peace Center.(1)

In 1980, Roy’s son, Clark Kepler, took over the management of the bookstore.

Kepler's evolved along with the local community, and in 1989 moved to Menlo Center on El Camino Real, literally at the heart of Menlo Park.

In 1990 Publishers Weekly named Kepler’s “Bookseller of the Year.”[6]

Kepler's closed on August 31, 2005.(2)
Kepler's reopened in October 2005 and Jimmy Carter signed books the next day!(3)(4)
Kepler's Books has since moved across the street (to 1010 El Camino Real). The site of the original store is currently a Leather Furniture Store.

Late spring 1961(7)
Garcia had traded in his Sears electric guitar for an acoustic model shortly after arriving in Palo Alto, and late that spring Barbara bought him a better guitar, and shortly after that, a lovely sounding Stella twelve-string. Jerry spent hours in the back room at Kepler's practicing and playing the limited folk repertoire he had mastered, which consisted mainly of straight-ahead popular tunes by the Kingston Trio, Joan Baez, The Weavers, Pete Seeger and other leading lights of the burgeoning folk revival movement.(7)

Late spring 1961 Marshall Leicester(8)
In late spring of 1961, Marshall Leicester, who'd had a passing friendship with Garcia back at Menlo Oaks Middle School, returned to the Peninsula from a year at Yale. One day, "I walked into Kepler's and Jerry was sitting there playing a twelve-string guitar and singing tunes like 'Everybody Loves Saturday Night' which was one of those kind of Pete Seeger 'love-your-worldwide-neighbors' songs in which the verses are the words 'everybody loves Saturday night' in about fifteen languages -- sort of the last gasp of the politically oriented folk music of the '30s and '40s. I think I asked to borrow his guitar and play some of my kind of music on it, and I think we were mutually impressed with each other. We remembered having met before and we hit it off."
Leicester taught Garcia the rudiments of the fingerpicking guitar style and also introduced Garcia to the main traditional white folksong forms of the south -- old-time string band music and bluegrass. "He was playing more strum stuff, Kingston Trio oriented songs," he notes. "He wasn't playing melodically oriented guitar at all. I think he'd gotten away from rock 'n' roll too, so he wasn't using a flat pick either. So I taught him how to play stuff like [Elizabeth Cotten's] 'Freight Train', and he just took it and ran with it on his own -- I never saw anybody learn how to do something as quickly as he picked up on that. So from there he went and made himself into someone with a sense of style.
In those days we all wanted to be Mike Seeger, so we were all trying to learn to play five or six instruments. Jerry was just playing the guitar at first, but then of course he took up the banjo and got really good at that, too."(8)

Summer 1961 David Nelson
"It was through the Albin brothers that Nelson met Garcia: "I still remember that moment at Kepler's when Pete and I were peeking through some books, and we saw this hairy, swarthy guy with an open Levi's shirt and a real brooding look and an olive wreath in his hair, playing a Stella twelve-string.
We talked to him and Rodney put a banjo in my hand and I thought, 'Oh no!' I had learned a little bit of banjo from a Pete Seeger book Rodney had given me, but here I was playing with Garcia the first minute I met him!"

Email ThisBlogThis!Share to TwitterShare to FacebookShare to Pinterest
Labels: K-Venues