The former site of the synagogue for Temple Beth Israel, an early Jewish congregation in San Francisco, founded around 1860, which began constructing its fifth building at 1839 Geary in 1905, although its completion was interrupted by the April 1906 earthquake.

Next to the synagogue was the Scottish Rites (Masonic) Temple Building, known as the Alfred Pike Memorial Temple, at 1859 Geary, which dated back to the 19th century.

A remarkable photo exists from right after the 1906 San Francisco earthquake, showing a damaged Beth Israel synagogue and the equally damaged Masonic Temple, with an empty lot where the future Fillmore would be built a few years later.
Although there were a number of different addresses on the block, these three buildings were the main structures on the block until the 1980s.(1)

On March 16-17, 1967, the building was used for a Benefit for The Church Of The Good Earth along with the People's Prison Symposium. John Sinclair was one of many speakers.

A brief article in the May 3, 1969 edition of Music Industry trade magazine Billboard notes that Bill Graham sold the Geary Temple next to his old Fillmore Auditorium to Western Addition Youth Group, Inc., a self-help for ghetto teenagers for $166,000, although another bidder was willing to pay $175,000.
By that time, Graham had moved from the Fillmore to the Fillmore West, a dozen blocks and a mile and half away.  In any case, the Billboard notice shows that Graham owned the Geary Temple, and that accounts for the abrupt absence of any shows at the Geary Temple from 1966 onwards.(2)
Temple Beth Israel was on the move as well, as its Congregation merged with another Congregation, becoming Congregation Beth Israel-Judea in 1969. The Congregation moved to 625 Brotherhood Way in San Francisco, where it remains today.
The Temple at 1839 Geary seems to have been temporarily used for other functions.[1]

“In 1972 the Temple was leased by a generous Polish refugee, Janos Kovak, who quit his job as a Bank of America executive to establish a music hall, art gallery and community center: it went by the name H.O.G. (House of Good). I was one of about a dozen who worked to prepare the place, later ran the sound system with the assistance of Prairie Prince, a talented drummer with the Tubes; he also air brushed fine infinite space wall murals in the entry and up the Florentine marble stairs.
We rehearsed, partied and did showcasing of groups including Sylvester of The Cockettes and later on disco fame, his backup singers the Pointer Sisters, the Doobie Brothers (they were just a beer bar band from the Peninsula), Lamb, which later split into Huey Lewis and the News and Elvis Costello's first recording group, some terrific jazz, and others just a blur now. The HOG never opened, although we came close getting the word just hours before opening with Norman Greenbaum, a group called One from a commune in the Upper Haight and the headliner: John Lee Hooker featuring Little John Hooker on Hammond Organ. When the police closed us down for lack of permit we talked to Reverand Jones next door about moving the show to his place (The People's Temple); he seemed interested but got cold feet when the police spoke to his people. The old Fillmore next door was then headquarters for the local Black Muslims, their fine bakery on street level, the meeting room upstairs. Hilgard Sternberg ran the stage, we were paid occasionally, the Cockettes hung out, we all saw the possibilities and we got to run a HOG tab up the street at Minnie's Can Do. Seemed a time of transition for all involved. Janos Kovak opened a fine bar on Haight Street shortly afterword of the Temple.”[9]

Although the venue had "festival seating" for the most part, probably different than its synagogue functions, the elegant ceilings and decorations were intact, and it was not only a beautiful building but beautiful sounding as well.(1) 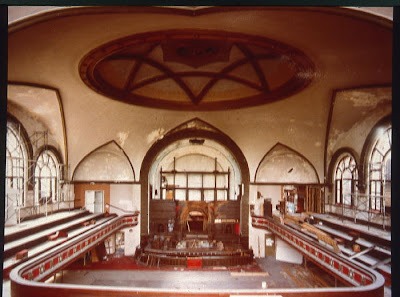 Right next door, however, was the converted Alfred Pike Memorial Scottish Rites Temple, which by this time was the headquarters of Jim Jones's infamous Peoples Temple. Jones and his followers left for Jonestown, Guyana and their tragic mass suicide took place on November 18, 1978. While Theatre 1839 was not directly connected to those events, it did add to the strange mojo of the block.

Temple Beautiful
Theatre 1839 did arise as a performance venue, however, known as Temple Beautiful in early 1979 and hosting a number of punk rock shows. The Clash played their first SF performance (2nd US show) there as an underground show advertised purely through graffiti.
Why did the building stop being used for music after about 1980?

New Wave A Go Go
Not sure if this was the name of the venue or they may have just called it "1839 Geary" when the punks took over.

Duquette Pavilion
In the late 1980s, while driving down Geary Street in San Francisco, designer Tony Duquette discovered an abandoned and vandalized synagogue. He immediately purchased the building. After thoroughly remodeling and updating the structure [located on Geary near Fillmore where the post office now stands], Tony began creating a new exhibition named the Canticle of the Sun of Saint Francis of Assisi, after the patron saint of San Francisco. 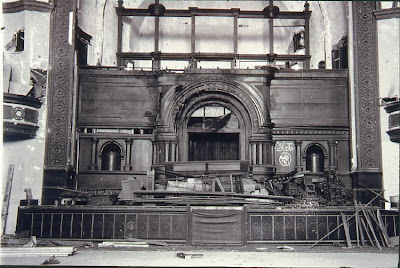 The building itself was historic, and what Tony did with it architecturally was equally historic.
When he found the building it was missing all of its windows, and the first order of business was to seal it up beautifully. Using his favorite material, cast resin, he created amazing inverted conch-shell windows in the two towers and replaced the original stained-glass main window with a creation made from Plexiglas, resin, golf balls, sliced plastic drinking glasses, plastic salad servers from Pic ‘n Save, and all manner of everyday items, which he found beautiful in their repetition.

An 18th century figure of St. Francis was positioned at the center of the old altar, surrounded by a flock of Rajputani clay birds — perched in dead tree branches — to which he preached a sermon.
Giant faux malachite urns from an 18th century Austrian palace graced the sides of the stage, and behind those were the amazing 15-foot-tall gold-leaf Baroque trees that Tony had prominently displayed for years in his Los Angeles studio.
Above all of this was a giant copper sunburst made from the destroyed and discarded pipes of the building’s original pipe organ. All around the 80-by-80-foot room (and nearing the top of its 40-foot ceilings) ran a horseshoe balcony. It was on this balcony that Tony positioned his army of 28-foot-tall angels, with the 18-foot-tall Madonna in her pavilion holding court at the back. This entire ensemble was artfully hidden by a theatrical scrim, but when the lighting illuminated them from behind, the tableaux appeared and disappeared, to amazing effect. 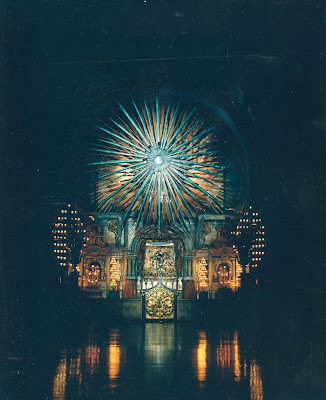 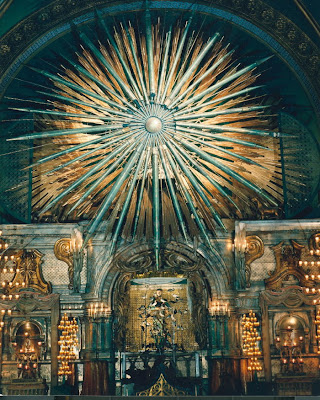 For this celebratory environment Tony asked his friend Herb Alpert to compose the music. Charlton Heston recited a new poem by Ray Bradbury, and the whole place was set to computerized lighting.
In the basement Tony set up several party rooms and various gallery spaces. 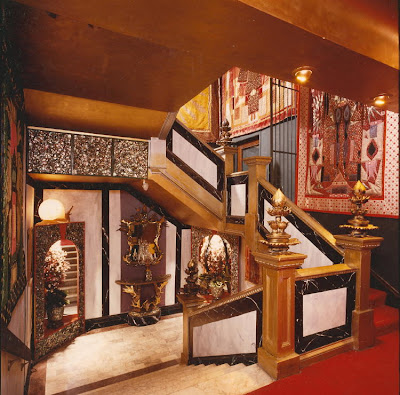 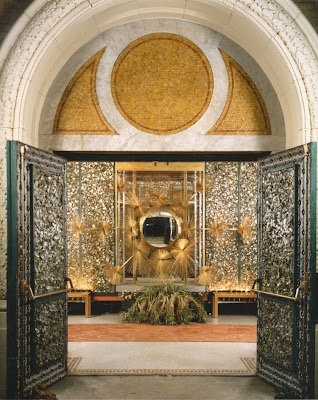 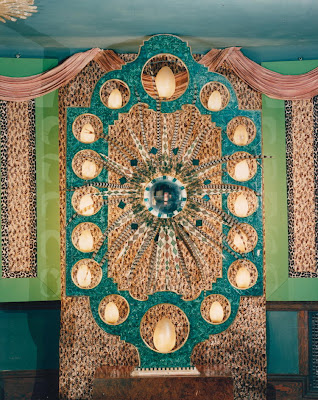 The biggest of these galleries held an exhibition of his wife Beegle’s paintings. The exhibition, like Tony’s other exhibitions, was a brilliant popular success.
Unfortunately, after being open only a brief time, the entire building — and all of its contents, including the majority of Tony’s personal collections and original works of art — burned February 16, 1989 as the result of an electrical fire.(4)
S.F. FIRE DESTROYS MUSEUM EMPTIES NEARBY CONCERT HALL
A San Francisco museum burned Thursday night, forcing the evacuation of neighbors and thousands of rock fans who were in the nearby Fillmore Auditorium. The fire at the Duquette Pavilion of St. Francis, a converted synagogue at 1839 Geary Blvd., quickly went to five alarms after it was reported at 9:19 p.m. Nearby buildings, including the Fillmore and the old Peoples Temple, were threatened but apparently undamaged. Some 140 firefighters and two dozen engines responded.(2)

The Loma Prieta earthquake of 1989 damaged the Fillmore Auditorium, Temple Beautiful (1839) and the former People's Temple (1859), and all the buildings were damaged by fire. The Fillmore was fully refurbished, but the two other buildings were torn down. 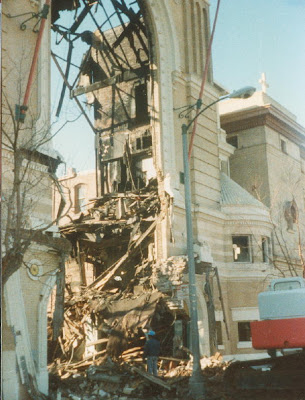 After some time as vacant lots, the 1839 and 1859 Geary addresses are combined as a U.S. Post Office.

Fall 1967 Grateful Dead (rehearsals)
"That fall [of '67] the synagogue next door to the Fillmore closed, and the Dead rented it as a rehearsal hall."(5)

Email ThisBlogThis!Share to TwitterShare to FacebookShare to Pinterest
Labels: T-Venues