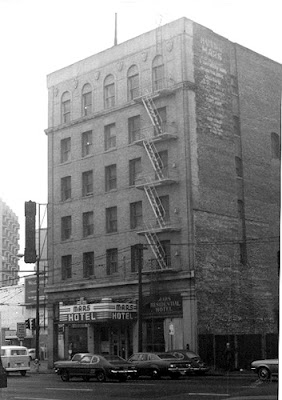 The San Francisco public library historical photo collection has one single photo of the Mars Hotel at 192 4th Street at the corner of 4th and Howard, where the Moscone Center is today. 3rd and 4th streets near Mission and Howard was a low income area in the 60's and 70's similar to 6th street today and was demolished to make way for the Moscone Center in the 80's.

Kerouac wrote about the ‘Mars Hotel on 4th and Howard’ while in Big Sur.
"Coming 3000 miles from my home in Long Island in a pleasant roomette on the California Zephyr train watching America roll by..." To San Francisco where Jack stays "at my"secret" skid row hotel (the Mars on 4th and Howard).(1)

David Bowie also uses a clip of himself in front of the Mars Hotel in the "Jean Genie" video...check it on Youtube...its only for a few seconds.(2)

The Grateful Dead Movie includes film of the hotel being demolished.