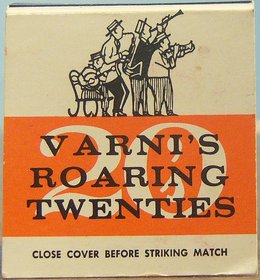 Under the name Varni's Roaring Twenties, the club was known for "The Girl On The Swing", where comely young ladies would swing over the stairwell in the center of the room.
Their calling card was a naked girl on a swing who, indeed, swung over the entire building. The club had briefly gone away from Topless in 1966, but had rapidly returned.


From looking at the ad (in the May 6, 1967 San Francisco Chronicle) its clear that they have borrowed the iconography of the Fillmore posters, with the wobbly letters and the promise of a light show.
Their house band at the time was a group called The New Salvation Army Banned, a Haight Street group who had been playing there almost every night since at least March.(1)
Michael Wilhelm of The Charlatans confirmed me that his band played there at Roaring 20s as house band for six weeks during circa March-April 1967, before The New Salvation Army Banned.(2)

On Sunday, May 14, The Roaring 20s had a special event, promoted in that day's Chronicle (above), The Artists And Models Bal Masque. The blurb helpfully points out that tickets will be available to the public. Another listing says that the Jerry Hahn Trio (a jazz group) and Notes From The Underground (a Berkeley Folk-Rock group) would also be playing.

As The Orphanage, however, the club became North Beach's premier rock spot for a hot minute during the early seventies. 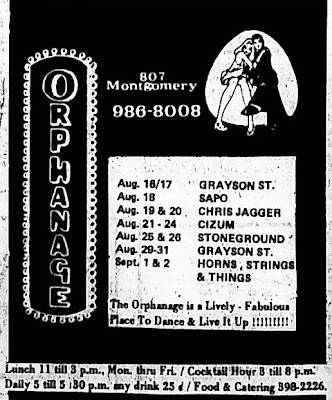 Mick Jagger and Keith Richards showed up during the wee hours to catch reggae greats Toots and the Maytalls one night in 1975, the same year that friends of deejay Tom Donahue gathered at the club to hold a wake. The Tubes played without costumes or makeup for the first time that night and Peter Yarrow (of Peter, Paul and Mary), of all people, opened the event, which lasted until the early morning hours of the next day.(excerpt from Joel Selvin's book)

Now known as the Arnold Laub Building, it houses The Armstrong Law Firm.
The building is in the heart of the historical Jackson Square district. It has 18' ceilings and lots of light with brick & timber construction.The property includes operable windows. 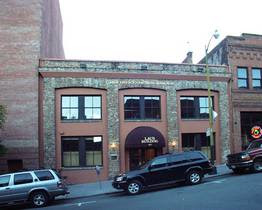 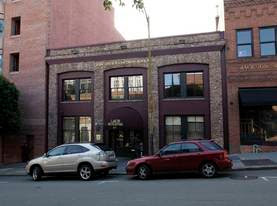 8/30/75 Keith and Donna Band
Knock On Wood, Farewell Jack, I've Got Jesus, It Takes A Lot To Laugh It Takes A Train To Cry, I Can't Turn You Loose, Sweet Baby, Strange Man, Tough Mama, My Love For You, Showboat, Come See About Me
Jerry's first public use of the TB1000A #51 guitar.
"Garcia started using the Travis Bean in 1975 but not until after the summer. 9/28/75 is the first Dead show with the Bean (TB1000A). He started using it a couple of weeks before that with the Keith and Donna Band on 8/30/75. The Boogie at the time was a cut and dry Mark I 1x12" combo. They came wired with preamp out 1/4 inch jack underneath the chassis. Garcia could take the preamp signal and step it up to the volume he needed with an external power amp such as the McIntosh. Then he ran the speaker outs on the Mac to any number of extension cabinets loaded with his speaker du jour at the time. Between 1975 and 1976 he went through 3 different guitars before settling on the Travis Bean TB500 for the later half of 76."[4]