In 1886, Ferdinand Wythe Peck, a Chicago business man, incorporates the Chicago Auditorium Association on December 8th for the purpose of developing the world's largest, grandest, most expensive theater. The building is to include an office block and a first class hotel.

On the board are Marshall Field, Edson Keith, Martin Ryerson, George Pullman, and other Chicago business tycoons. Adler and Sullivan are hired to design the project, based on their work at the Interstate Exposition Building.
On October 5th, 1887, President Grover Cleveland lays the cornerstone for the Auditorium Building.
In 1888 the Republican National Convention is held in the partially finished Auditorium Building. Benjamin Harrison is nominated. Adler and Sullivan hire young draftsman Frank Lloyd Wright.

1891-The Chicago Symphony Orchestra debuts on October 16 and makes its home in the Auditorium Theatre until moving to Orchestra Hall in 1904.

The Auditorium Theatre is the greatest monument imaginable to the classic dictum of one of its architects, Louis Sullivan, that form follows function. Completed in 1889, this elegant hall has a surprisingly low, arched proscenium and a ceiling that gradually heightens as it recedes in several arches, a design unprecedented in the late 19th century. The Auditorium was the first theater shaped like a cone or speaking trumpet. The stage corresponds to the apex of a hollow cone, while the proscenium, arched roof, and diverging walls retreat in a series of constantly widening circles. The main floor and balcony seating also are set in generous, sweeping curves.

The Auditorium Theatre was the first lit entirely by incandescent bulbs, which eliminated the need for a conventional chandelier.
As a result, when I sat six stories up and 180 feet from the stage, in the last row at the back of the highest balcony, listening to a rehearsal of Beethoven's Ninth Symphony, the sounds of the orchestra, soloists and choir were nuanced and vivid. Conversations among conductor, choirmaster and musicians were also remarkably clear.

These unsurpassed acoustics are the achievement of Sullivan's partner, Dankmar Adler, who also engineered the theater's innovative hydraulic lifts to move scenery, the first ever central air conditioning system, and drop-down ceiling panels to block off the top balconies for more intimate performances. Adler wrote: "The architectural and decorative forms found in the auditorium are unconventional in the extreme and are determined to a great extent by the acoustic effects to be obtained."

Following his partner's functional imperatives for exceptional sound (and superb sightlines as well), Sullivan designed the hall's 4,200-seat interior to complement its revolutionary shape. For example, the Auditorium was the first theater entirely lit by incandescent bulbs, with 3,500 of them running along the ceiling arches and the fronts of the balcony and galleries. They envelop the audience and eliminate the need for a conventional chandelier in the center of a domed ceiling, common in most 19th-century opera houses and almost certain to deaden a hall's acoustics.

Sullivan also eschewed the plush red common in theaters of that era. The Auditorium's surfaces are painted ivory in subtly graded tones overlaid by three-karat gold leaf. He designed scores of foliate motifs in cast plaster relief as settings for the projecting lightbulbs. The boxes along the sides of the house are set off by elegant cast-iron arches and railings whose floral decorations echo the patterns in the ceiling.

Mosaic marble floors flow throughout the theater and its lobbies and foyers. In all, Sullivan used 55 million pieces of mosaic tile. Over the doors at the building's entrance are six arched art glass lunettes inspired by the allegorical figures of Wisdom, Oratory, Drama, Music, Poetry and Dance.

Legend has it that late one night Sullivan caught his apprentice Wright moonlighting on home designs in Sullivan & Adler's offices in the Auditorium tower and fired him. Wright was not a man known to forgive. But shortly before his death in 1959 he told an audience of potential benefactors to "be kind to this theater and it will be kind to you." They were -- and today the theater is both a grand and fully operational masterpiece.

"Inglenooks" at the rear of the theater are used before performances and during intermissions. Originally, they included working fireplaces and long wooden benches warmed by radiators underneath the cushions. (One contains the geometric designs favored by Sullivan & Adler's young apprentice, Frank Lloyd Wright.)

But the theater occupies less than half the huge 400,000 square foot Auditorium Building, which originally included a 400-room hotel and 130 offices. Those who see only Sullivan's exterior design have a very different notion of what this architectural masterpiece is all about.

The monumental Romanesque outer structure is largely built of granite and limestone, massive to behold. The granite was so heavy that the entire building sank more than a foot into the marshy soil, requiring the architects to add stairs leading down from the entrance to the lobby. When new, it was the tallest building in Chicago at 270 feet, and the largest building in the country, capped with what Wright called a "nobly frowning tower."

It had been developed by Ferdinand Peck as one of the world's first multiuse buildings. Peck wanted the theater to serve a broad public. To that end, he ordered Sullivan and Adler to incorporate very few boxes for the upper crust and sponsored workingmen's concerts with subsidized ticket prices.
Peck assumed that the theater would be supported by revenues from the hotel and office suites. But the hotel quickly lost favor because it had no private bathrooms, and the office complex lost out to more modern structures.

1900-Booker T. Washington, the founder of the first college for African-American teachers, Alabama's Tuskegee Institute, addresses a capacity crowd at the Auditorium Theatre.

Ironically, the theater itself flourished in its early days as the home of the Chicago Symphony Orchestra and the Chicago Opera Company. But after the symphony left in 1904 and the opera in 1929, the theater declined, closing in 1941. The Auditorium Building would have been demolished but for its fortress-like architecture. Estimates for demolition during the early 1930s amounted to more than the land was worth.

1910-The Chicago Opera Association, later renamed the Chicago Civic Opera Company, takes up residence in the Auditorium Theatre, with its first performance on November 3rd.

In 1912 Theodore Roosevelt gives his famous "Bull Moose" speech at the Auditorium and is nominated for President of the United States by the independent National Progressive Party.

1919-The funeral of Cleofonte Campanini, conductor of the Chicago Opera Company, is held on the stage of the Auditorium Theatre.

1921-The Chicago Opera Company's performance of Madam Butterfly is broadcast live from the Auditorium Theatre. It is Chicago's first live radio broadcast.

1933-In the midst of the Great Depression, Chicago raises $125,000 to refurbish the Auditorium Theatre in time for the Century of Progress World's Fair.

1941-The Auditorium Theatre closes during the Great Depression.

In 1946 Roosevelt University moves its operations into the Auditorium Building, but the Theatre is not restored. During World War II, parts of the building were used as barracks. The stage became a bowling alley. At the end of the war, demolition discussions were revived, but the cost remained prohibitively expensive.

In 1946, a new university, Roosevelt, took over the Auditorium Building from the city for $85,000, with all prior real-estate taxes forgiven. The theater was left empty until a succession of civic benefactors began raising funds for restorations that continue even now.

1952-In order to widen Congress Street, a sidewalk is created through the south end of the building, destroying the hotel cafe, the famous long bar, and other original public areas.

1960-Mrs. Beatrice T. Spachner establishes the Auditorium Theatre Council to raise funds for the restoration of the Theatre. Respected Chicago architect Harry Weese volunteers his services to restore the building to its former elegance.

Though the Auditorium opened to immense critical acclaim, what began as a masterfully-designed opera house that sprang from the minds of geniuses gradually fell into disrepair. For decades the Auditorium Theatre continued its decline before experiencing an astounding resurgence in the 1960's, and ultimately returning to its former status as a jewel in American history.

At the grand reopening in 1967, the New York City Ballet performed "A Midsummer Night's Dream." "Why don't they build like this today?" said the NYCB's director, George Balanchine. "Nothing could be more modern than this."

1968  Anti-Vietnam war protesters clash with police in the streets outside the Auditorium Building and the Congress Hotel during the Democratic National Convention.

1968-'75  The Auditorium serves as Chicago's premier rock house, with performances by Jimi Hendrix, The Who, Janis Joplin, The Grateful Dead and many others.

In 1970, the Auditorium building is placed on the National Register of Historic Places.

2002-The Theatre initiates Phase II of its ongoing restoration project, highlighted by the removal and reconstruction of the theatre's 113-year old stage.
An examination and assessment of Louis Holloway’s original proscenium mural was performed prior to conservation. Restoration of the theater’s ceiling included decorative painting, the application of 16,000 square feet of missing gold-leaf gilding and stenciling, decorative plaster repair, and the restoration of scagliola columns, as well as recommended improvements to the lighting system.

Today, the Auditorium Theatre is the permanent home of The Joffrey Ballet, and it has been the venue for a range of performances -- from dance troupes and Broadway musicals to Bruce Springsteen and Richard Pryor.

The venue is just personal enough that you feel like you are hanging out with the band, and just big enough where your ears aren’t ringing from the acoustics for the next few days. (Mallory Ulaszek-Citysearch)

Though massive in size and scale, the theater has an aura of European elegance. The lobby is dimly lit and spacious, with a concession island in the center. The theater itself also has low lighting (making playbill reading a challenge), but the many tiny lights above and around the seating evoke a beautiful star-filled evening. 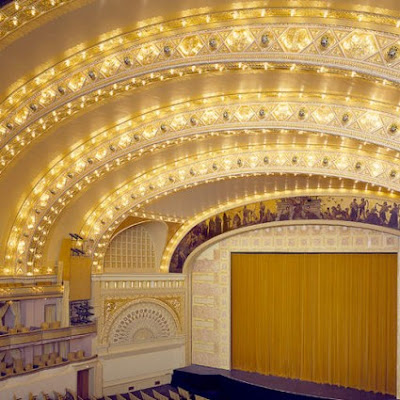 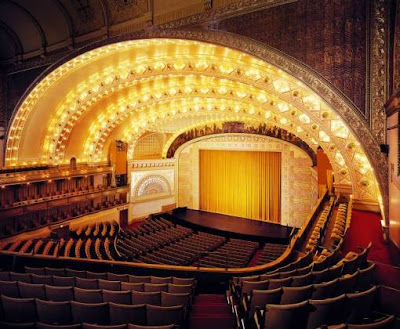 The main floor extends back a considerable distance--binoculars are recommended past about the 30th row. For the most popular events the theater will make available all 3,661 seats--although anyone with a fear of heights is advised to avoid the second balcony and gallery. (Citysearch)

Even in the very high seats (don't arrive after it begins, the stairs need light for negotiating), you will be able to hear beautifully. (Christine Z.-judy'sbook)

10/22/71 Grateful Dead
5/21/75 Jerry Garcia Band
11/21/75 Jerry Garcia Band
6/26/76 Grateful Dead
6/27/76 Grateful Dead
6/28/76 Grateful Dead
6/29/76 Grateful Dead
5/12/77 Grateful Dead
5/13/77 Grateful Dead(7)
"I was going to school in Champaign at the time and came up to see this show - had what was claimed to be something left over from the Bear (a friend of my roomate had it stored and split it with me) and I will never forget it. The Auditorium was one of the best places to see anyone due to the "Acoustically Perfect" arena of this venue - there's even a placard that attests to this fact. I remember vividly the solo that Jerry went into and the only reason it didn't last longer was the crowd started a few hoots and hollers - I really think that if everyone had kept quiet, he would have continued even longer. It was phenomenal. This was also the first show that made me openly weep. Stella Blue. I, too, have never seen it performed with such majesty and have seen them do it many times later but never like this show. My seats were about 15 rows back and just off to the side, about as perfect as one could get. Absolutely my favorite show."(6)