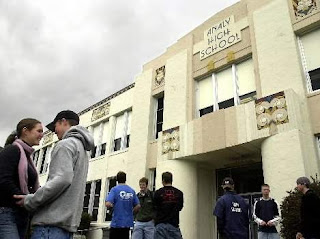 
Jerry performed here
Fall 1959
Analy High School is where Garcia played his first gig. He had a five- piece combo, The Chords, in which he played the guitar, and there was a piano, two saxes, and a bass. They won a prize of being able to record their own song. They chose Bill Doggett's "Raunchy".  Jerry did not graduate.Jerry Garcia enrolls as a junior at Analy High School. Garcia does not finish his senior year at Analy, enlisting in the military.(1)

Posted by Jerry's Brokendown Palaces at 9:40 AM