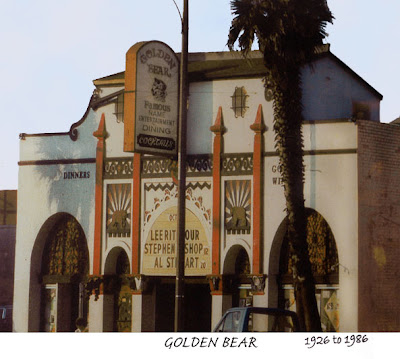 Originally built in 1929, the Golden Bear on Pacific Coast Highway began as an elegant Greek restaurant patronized by many Hollywood stars in the 1930’s.
There were two Golden Bears people remember in Huntington Beach. The
first began at 226 Main St. as a cafe in 1922 run by chef Harry Bakre.
He called his little cafe the Golden Lion, after one in San Diego that
he had worked as a chef. But because there was another cafe by that name
in Orange County, he changed the name to the Golden Bear.
Around 1925 Bakre and his wife Elsie moved the restaurant to a small
building at 310 Pacific Coast Highway.
Bakre enlarged the building to include 306 PCH in 1929 to the size most remember. Harry and Elsie contemplated adding a second story for a
hotel and they planned to call it the Golden Bear Hotel. But it never
materialized, although the cafe served to house the homeless just after
the earthquake of 1933.
The second Golden Bear began life as a nightclub in 1974 by Charles
and Rick Babiracki.

The Golden Bear was on Pacific Coast Highway across the street from the pier and about a half a block south.


The arch can be seen, as well as the train depot to the far left and an oil derrick peeking in at the upper right. Today, the Golden Bear is gone, as is the arch, train depot and the oil derrick.
Where the entrance would have been — a hot dog place is today.
In the basement of the Golden Bear there were wooden crates of hand painted tiles from Greece - like the colorful tiles by the outside door. The tiles showed types of foods served in the Golden Bear's early years. I always liked the cow's head tile and the baskets of fruit. The tiles were thoughtlessly destroyed in 1986 - even after the Orange County Historical Commission asked to preserve them.
The Golden Bear didn't have the best acoustics or sight lines, but it had a vibe that only places like the Whisky a Go Go or the Troubador have. The only difference was that, when you left after a show with your ears still ringing, you got a face full of ocean breeze.

The Rolling Stones once secretly crept in to hear Gram Parsons play in 1969.

An old multi-story Spanish red brick building with a white stuccoed front, it had very Spanish appearing facades on the upper floors. The ticket window was extremely small, barely big enough to get your head through. There was a large marquee that advertised who was appearing currently and for the next two weeks.
Inside it was wooden floored with about 30-50 tables scattered around a fairly small stage  (the stage side tables were the most choice and you had to get there early to get one). For the biggies, there were usually two shows and the place was cleared after the first show unless you had purchased tickets for the second.
The menu was not very extensive. The upstairs was mostly closed in private rooms with a couple of viewing balconies.
The owner, George Nikos, (Greek George)was in his mid or late thirties (maybe early forties) and was a very nifty guy to get along with. He did an awful lot for younger artists in the area. (Les Blank) 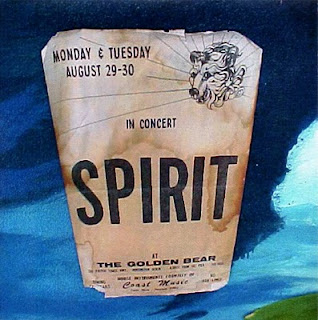 The club was nearly half a century old when the Babiracki brothers took it over from George Nikis, the restaurateur who had made it an important part of Southern California's booming folk and rock music scenes in the 1960s by booking such acts as the Doors, Bob Dylan, Jimi Hendrix and dozens of others on their way to pop music stardom.
Richard Babiracki, was a onetime investment counselor who parlayed a fan's love of music into ownership of the fabled Golden Bear nightclub in Huntington Beach. Babiracki, who operated the celebrated rock, folk, blues, country and comedy venue with his younger brother, Charles, from 1974 until it closed in 1986, had been in declining health for the last year, and was hospitalized in January. He died Saturday in Orange.

"I always felt the Bear never got the credit it deserved for keeping people alive, for the role it played in performers' lives and in the music business, and the number of songwriters that went through there," said John McEuen, a member of the country-rock group the Nitty Gritty Dirt Band. He became part of the band during a 1966 show at the Huntington Beach club.

The Babirackis, who grew up in Minnesota and came west after college seeking the sun and fun of Southern California, originally wanted to open a patio restaurant when they found that the Golden Bear, which Nikis was then operating as a Greek restaurant without live music, was for sale. "I was just someone who liked music," Richard Babiracki told The Times a few months after he and his brother took over the club. "I didn't know anything about the nightclub business. I had to acquaint myself with the people who were coming up in the entertainment industry because those are the ones we are trying to book."

In the 1970s and '80s, the Golden Bear was a familiar stopping place for many veteran acts on their way down and a new generation hoping to be headed up. As trends in music shifted, the Babirackis tried to shift with them, booking such new wave and alternative music acts as Men at Work, the Motels, Oingo Boingo, the Plimsouls and the Ramones.

The Golden Bear's steady diet of old folkies, rockers and blues greats mixed with those of a younger generation to help establish Orange County's identity in the Los Angeles-based music industry. It contributed to a burgeoning underground scene that exploded in the 1990s with the commercial breakthrough of such Orange County-bred bands as No Doubt, the Offspring and Sugar Ray.

The Babirackis ran into financial problems when they tried to open a second club, called Panache, in Long Beach in 1983. The venture lasted less than two years, at which point the Babirackis filed for Chapter 11 bankruptcy protection to keep the Golden Bear operating. By that time, the Babirackis' primary focus on veteran acts gave the Golden Bear a reputation as a backward-looking club in a forward-looking time, and such cutting-edge clubs as the punk-centered Cuckoo's Nest in Costa Mesa and the alternative-minded Safari Sam's less than a mile away from the Bear in Huntington Beach took over as the hip places for young music fans.

In January 1986, the Bear lost its lease. The Golden Bear was bulldozed by city officials who said it did not meet earthquake safety standards and would have to make way for new development. Faithful fans, on May 18, 1986,  were on site as the wrecking ball demolished the aged building and grabbed bricks as souvenirs of this rock ‘n’roll historical landmark. One of the owners, Dick Schwartz, had some of the bricks and wood
beams transported to his home in Thousand Oaks for a deck.(1)

In August 1990, the Pierside Pavilion opened on its original site and the Bear was brought back by Peppers. Inc. Numerous classic rock actsthat played the club in the ‘70s and ‘80s returned to play at the new venue. Opening night was headlined by Eric Burdon of The Animals and Robby Krieger of The Doors.
However, the new Bear’s reincarnation was short-lived when the club was forced to go out of business after a theater complex opened above it. Noise issues arose over decibel levels and by spring 1991, the Bear was closed down again.

12/28/74 Merl Saunders
With DS? and Maria Muldaur[7]
"A trumpet player stepped up mid-set and asked Jerry if he could sit in and Jerry said "Sure!" During the punches at the end of Freedom Jazz Dance, he launched into an excruciating off-key squealing solo and wouldn't stop! Jerry was shaking his head in disbelief and dismay but graciously didn't cut him off and let him finish his butchering, but did step forward right away to say "Thanks, man" when the song ended. The guy was sweating like a pig and appeared to be pretty drunk and I imagine that was the end of his collaborations with Jerry and Co."[1]

Email ThisBlogThis!Share to TwitterShare to FacebookShare to Pinterest
Labels: G-Venues