Around 1950 a new Motel, The Terrace, was built, complete with large swimming pool.
The Texas Opry House (back in the 50's it was part of the old Terraces Motel) closed in December of 1974 just before the Ray Charles concert due to Willie Nelson's problems with the IRS, and reopened in late 1975 as the Austin Opry House. 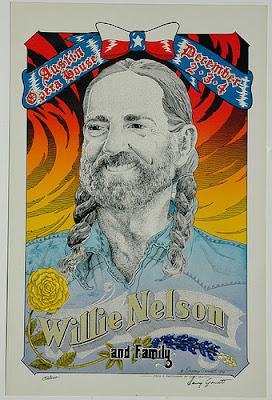 Willie Nelson opened the Austin Opry House on June 28, 1977 and played for one week solid for the grand opening ceremony. The big outdoor picnic for that year never happened. 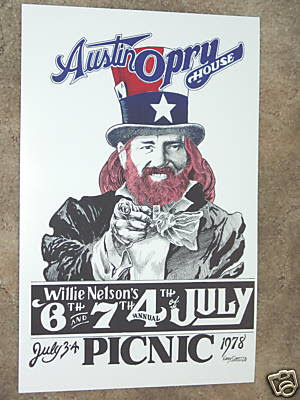 The picnic in 1979 moved to Willie's country club. This is the missing picnic poster. It is next to impossible to find (limited distribution) and a real collector's item. It measures about 11in by 17in and was drawn by Danny Garrett.
It is colored in Red, White and Blue and has a picture of Willie dressed as Uncle Sam pointing to you.”( Roger, e-bay)


Austin Weekly
September 21 -27, 1988
Willie Nelson has turned over ownership and management of the Austin Opera House to Tim O’Connor and Morris Lyda of Entertainment Complex, Inc. of Austin.  O’Connor has served as the manager of the downtown entertainment nightspot since it opened in 1977.

The Austin Opry House was on Academy, just a couple blocks or so east of Congress. This was one of the most rustic or dilapidated of all Austin clubs. Beer and popcorn. A '50s high school auditorium vampire movie could have been filmed here. Charm, personality and a degree of old time grit and grease made it all work.
The Opry House was right behind the last stop for Soap Creek Saloon after it had been, first out on Bee Caves and then at the old Skyline Club on North Lamar. Kind of a nice circle of clubs when you could go to the Opry House, Soap Creek Saloon and the Continental Club, all within a couple of hundred yards of each other.

The Austin music scene lost a great venue, even though the ownership followed up with the great Backyard venue in Bee Caves and the Austin Music Hall.
Austin's last great old downtown dancehall.

Demand Media is now at the Academy Drive location. It's an office building. It is now also Arlyn Studios, a recording studio owned by Willie's nephew, Freddie Fletcher.(1)