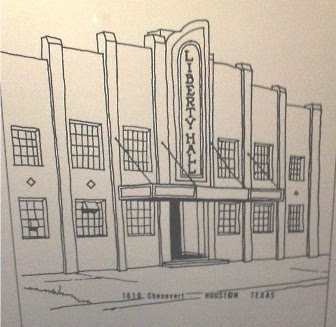 On March 4, 1971, Liberty Hall opened at 1610 Chenevert in a rapidly decaying area of downtown near where Toyota Center is today. While Liberty Hall would last only seven years, it became a storied venue.
According to Mike Condray, one of the original owners, "In the late '60s, George Banks and I opened a psychedelic music venue called Jubilee Hall. That morphed into the Family Hand, a restaurant with live entertainment.
"From there, Liberty Hall was founded in 1971 by Ryan Trimble, Lynda Herrera and I. It was Herrera who came up with the name."
It became the hot spot after Love Street and Of Our Own shut down.

"We opened with a rock 'opry' called The Earl of Rustin," Condray says, "an original stage show scripted by and starring Ragan and C.C. Courtney. It was a smash with Houston audiences and critics. It eventually garnered financing in Houston for a Broadway opening."
Then the Hall swerved into six weeks of blues shows with the likes of ­Freddie King, Big Mama Thornton, Lightnin' Hopkins and John Lee Hooker.

"One of the Hall's historic moments occurred during that six-week blues series when we had the newly formed ZZ Top open for Willie Dixon and the Chess Records session band," Condray notes. "Billy Gibbons was so young and skinny, but he could already play." 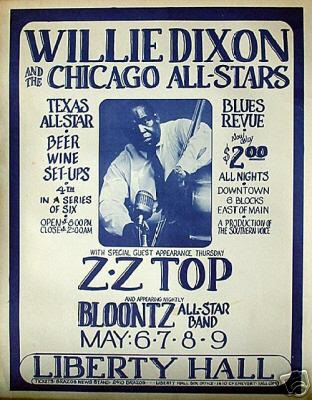 Liberty Hall found its true niche shortly thereafter: Emerging national acts would become its bread and butter.
At a John Lee Hooker show in 1971, Houston's finest with Chief Herman Short as the leader, raided the place and unplugged all the equipment. Hooker's son was on piano and kept playing until they physically removed him. Checked every table for id's. They finally left and the howlin' started up a fine night of memories.

Jackson Browne at Liberty Hall in 1972. He played 2 or 3 songs and then left the stage in a huff because the audience was too noisy. Bonnie Raitt may have played that night also.

Condray recalls one particularly amazing night.
"In February 1973, the alt-country movement was very much in its infancy," he says. "It found some of its early roots at the Hall the night Neil Young and Linda Ronstadt sat in with Gram Parsons and Emmylou Harris."
During that engagement, local songwriter Larry Sepulvado and his band the Sin City Boys gave Parsons and Harris some Sin City patches they had designed. Ronstadt requested a jacket and eventually wore it in a famous Annie Leibovitz photograph for Rolling Stone.
"There were about 20 of us out there screaming in our Sin City jackets," recalls Sepulvado.
The Hall also became a focal point for local progressive politics, hosting fund-raisers for politicians like future mayor Fred Hofheinz.
"When the National Organization for Women held its first national convention at the old Rice Hotel, they chose Liberty Hall for a night out," Condray recalls. "Tracy Nelson sang, and leading feminists like Gloria Steinem, Bella Abzug, Betty Friedan and Sissy Farenthold also appeared onstage before network TV cameras that evening."


Springsteen would later commemorate the venue in "This Hard Land," which appears on his 1995 Greatest Hits CD and 1998 box set Tracks: "Hey Frank, won't you pack your bags and meet me tonight down at Liberty Hall?"
"The same thing happened with acts like Billy Joel, Jimmy Buffet and Jerry Jeff Walker," Condray notes.

Cheech & Chong also paid homage to Liberty Hall during the encore of their recent show at Verizon Theater, saying they not only loved playing the club, but that it was instrumental in their early success.

Banks, who did the artwork for the 13th Floor Elevators album Where the Pyramid Meets the Eye, decided not to invest in Liberty Hall because he was returning to architecture studies at the University of Houston, but he did paint the club's sign and was involved in printing tickets.
"It was such a neat venue after our struggles operating Jubilee Hall and the Family Hand," Banks recalls. "We had people like Townes Van Zandt and Eric Taylor at Family Hand, but the space wasn't really made for music. Liberty Hall was proportioned just right and the stage and floors were wooden, so the sound was warm. It was a musician's dream."

KPFT partnered with Liberty Hall to broadcast a series of "Live at Liberty Hall" shows. Many were bootlegged and are now for sale on the Web, including one of the 1974 Springsteen show.

Liberty Hall seemed almost blind to genre, hosting acts like the Velvet Underground one week and Waylon Jennings the next. 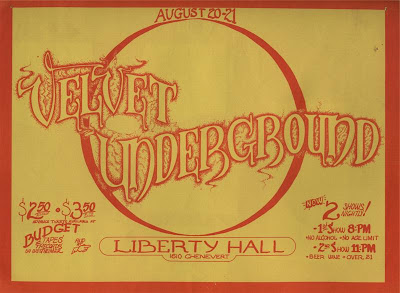 Ted Nugent, Tim Buckley, Roy Buchanan, Rory Gallagher and Bonnie Raitt all played the Hall; Jimmy Reed once joined Johnny Winter and his band for a show. Zydeco king Clifton Chenier played holiday dances and parties.
One night in particular Lightning Hopkins played there with Big Momma Thornton, and by the end of the set, Lightning (who seemed intent that night on impressing Big Momma) ended up playing his guitar lying flat on his back on the floor...something you wouldn't probably see in other venues.

By 1975, Condray saw the end approaching and left the ownership group."We were in the low end of an increasingly competitive business and the neighborhood was just crumbling around us," he says. "I thought it was time to move on."

The struggling venue closed for good in 1978 with a final hurrah by Chicago bluesman Muddy Waters.
The building was converted into a twin-screen movie theater featuring Chinese films, but the movie house failed and the building was eventually demolished.(1)

From 1971-1978 Liberty Hall hosted everyone from Ted Nugent to the Velvet Underground . The venue was so well known that Bruce Springsteen referenced it in one of his songs. It seems that no matter how big a club was at the time when it closes there isn’t much of a reference.  The same holds true for the closure of Liberty Hall.
There doesn’t seem to be much written about why a music venue that hosted artists that came to define much of the last two decades of the 20thCentury closed its doors. However, after it closed Liberty Hall became a Chinese movie theatre, but like many of the venues it was knocked down. Now, in the spot where the New York Dolls and Ted Nugent played, stands an empty lot with a view of the Toyota Center’s parking garage.(3)

Located on Chenevert at the edge of downtown Houston. Liberty Hall was Houston's premier small venue for national touring acts from the early 70s to the mid 70s.

Bands who performed there include Gram Parsons, Velvet Underground, Ramones, Jimmy Reed, Ted Nugent, Rory Gallagher, Bruce Springsteen (in '74), Gram Parsons (a performance available as a bootleg recording) and The New York Dolls.
Touring bands that could not play a larger concert venue like the Music Hall often performed at Liberty Hall (as well as other Texas stops like the Armadillo World Headquarters in Austin). The folks that created Liberty Hall were many of the same folks that created The Family Hand Restaurant on Brazos--Mike Condray and Lynda Herrera along with Ryan Trimble.


There were so many friendships made and fun times had at Liberty Hall. All the memories made there last a life time. Occasionally people search for their lost friends and reunite to share old stories forgotten like the memories made at the Bruce Springsteen concert in March 1974.(2)


Patrons were seated at tables in the back and in rows of seats in the front.

The believed incarnations of the building were:
1. A church
2. An American Legion Hall
3. Liberty Hall
4. A Chinese Movie Theatre
5. Demolished

Currently there is a vacant lot where the nightclub once stood.