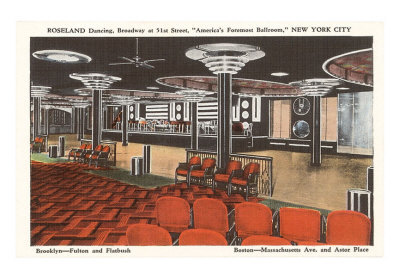 The Roseland Ballroom (also referred to as Roseland Dance City) is a multi-purpose hall, in a converted ice skating rink, with a colorful ballroom dancing pedigree, in New York City's theatre district, on West 52nd Street. 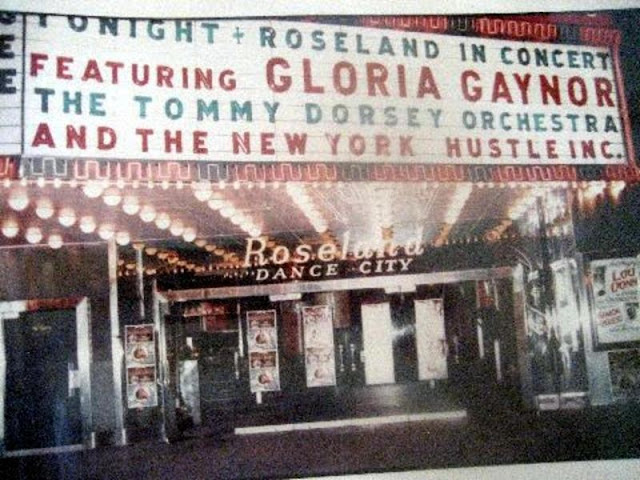 The venue, according to its website, can accommodate 3,200 standing (with an additional 300 upstairs), 2,500 for a dance party, between 1,500 and 1,800 in theatre style, and 800-1,000 for a sit-down dinner.[1]
The quirky venue has hosted everything, from a Hillary Clinton birthday party, to annual gay circuit parties, to movie premieres, to musical performances from all genres.
The rear of the venue faces West 53rd Street and the Ed Sullivan Theater. It is seen virtually every time that comedian David Letterman has outside antics during taping of the Late Show with David Letterman beside his theater (prompting various attempts to paint the industrial-looking wall to make it look better on national television).

Roseland was founded initially in Philadelphia, Pennsylvania in 1917 by Louis Brecker with financing by Frank Yuengling of the D. G. Yuengling & Son beer family.
In 1919, they moved the venue to 1658 Broadway at 51st Street in New York. It was a "whites only" dance club called the "home of refined dancing", famed for the big band groups that played there, starting with Sam Lanin and his Ipana Troubadours. Couples danced the jitterbug, Lindy Hop, and Charleston under the Roseland's famed star-studded ceiling.
The Fletcher Henderson Band played at the Roseland throughout the 1920 and 1930's. Orchestras that played the venue included Vincent Lopez, Harry James, Louis Armstrong, Tommy Dorsey, and Glenn Miller. The appearance by Count Basie was a turning point in his career and a break though in the all-white atmosphere of the club. One of his songs was to be the "Roseland Shuffle".
Brecker popularized marathon dancing until it was banned, staged female prizefights, yo-yo exhibitions, sneezing contests, and dozens of highly publicized jazz weddings with couples who met at the club.[2]

As the club grew older, Brecker attempted to formalize the dancing more by having hostesses dance for 11¢ a dance or $1.50 a half-hour with tuxedoed bouncers (politely known as "housemen") keeping order. It was to work its way into stories by Ring Lardner, Sherwood Anderson, F. Scott Fitzgerald, and John O'Hara.

The original New York Roseland was torn down in 1956 and it moved to its new venue on West 52nd, a building that Brecker earlier had converted from an ice-skating rink to a roller-skating rink. It had been built in 1922 at a cost of $800,000 by the Iceland ice-skating franchise. A thousand skaters showed up on opening night at the 80-by-200-foot rink on November 29, 1922. Iceland went bankrupt in 1932 and the rink opened as the Gay Blades Ice Rink. Brecker took it over in the 1950s and converted it to roller-skating.
Time magazine described the new Roseland's opening interior as a "purple-and-cerise tentlike décor that creates a definite harem effect."[2] Brecker attempted to maintain its ballroom dancing style, banning rock and roll and disco. In 1974 Brecker told The New York Times, "Cheek-to-cheek dancing, that's what this place is all about."
Brecker sold the building in 1981. Under the new owners the Roseland began regularly scheduled "disco nights", which gave rise to a period when it was considered a dangerous venue and neighborhood menace.

Bobby And The Midnites also played Roseland, a few weeks after Jerry, on June 14, 1983.

In July 1978, a 19 year old British exchange student was drugged and kidnapped from the ballroom by a group affiliated to the Red Army Faction. She was subsequently found in wasteland murdered 5 days later, and the killers never found.
In 1984, a teenager was shot to death on the dance floor.[3]
In 1990, after Utah tourist Brian Watkins was killed in the subway, four of the eight suspects (members of the FTS gang) were found partying at Roseland. As a result, Roseland discontinued the "disco nights".[4]
Its low-rise three-story structure on top of the quarter-acre dance floor in the middle of midtown Manhattan has stirred concerns over its being torn down for redevelopment. In 1996, a new owner, Laurence Ginsberg, filed plans to tear down the venue and replace it with a 42-story, 459-unit apartment building. A spokesman for Ginsberg said the filing was to "beat a deadline for new, more stringent earthquake codes, which went into effect earlier" in 1996. The interior space has been subsequently renovated.[5]
On March 8, 2011, at around 10:30 p.m., a 2-alarm fire in the mezzanine section was reported. The extent of the damage, and cause of the fire is not yet known. There was no event at the time of the fire's breakout.

1.)^http://www.roselandballroom.com/
2.)^ "Romp at the Met". Time (magazine). January 7, 1957. Retrieved 2007-06-21. "When a public dance hall named Roseland opened on Broadway in 1919, smart young people had recently deserted the waltz for the foxtrot, were just beginning to master the delicate nuances of the shimmy. Sam Lanin and his Ipana Troubadours were on the bandstand, thumping out such Ziegfeld Follies hits as "Mandy" and "You Cannot Make Your Shimmy Shake on Tea". Since that distant New Year's Eve, generations of stag-line Romeos and their girls have bunny-hugged, Lindy-hopped, Charlestoned, big-appled black-bottomed and jitterbugged under Roseland's star-studded ceiling. At 1 o'clock one morning last week the stars winked out for the last time; the following night Roseland reopened in glittering new quarters, billed as 'a magnificent metropolis of melody and merriment.'"
3.)^"18-Year-Old Is Killed In Roseland Ballroom". New York Times. November 11, 1984. "A Staten Island teen-ager was fatally shot yesterday morning at the Roseland ballroom in midtown Manhattan, the police said. The victim - Robert Dudley, 18 years old, of 62 Roxbury Street - was shot once in the chest at 3:26 A.M. and was pronounced dead on arrival at St. Clare's Hospital and Medical Center. The police said they had not established a motive for the slaying."
4.)^
5.)^An Old-Fashioned Dance to the Music of Time" - New York Times - October 13, 1996
6.)^Freidman, p. 52.