The Landmark Theatre was designed by Thomas W. Lamb and was christened Loew's State Theatre on February 18, 1928. Groundbreaking began on March 15, 1927 and less than a year and 1.4 million dollars later, Loew’s dream and Lamb’s vision had become a reality. It is the city's only surviving example of the opulent theatrical venues of the 1920s.
Often labeled Indo-Persian, architect Lamb further described the theatre as "European, Byzantine, Romanesque – which is the Orient as it came to us through the merchants of Venice."
Every surface is heavily decorated with persian/hindu/oriental themes. 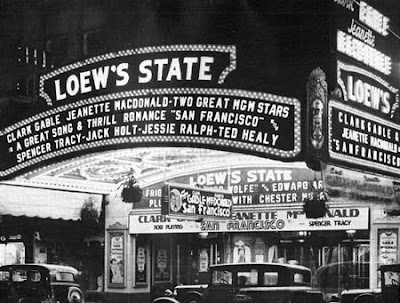 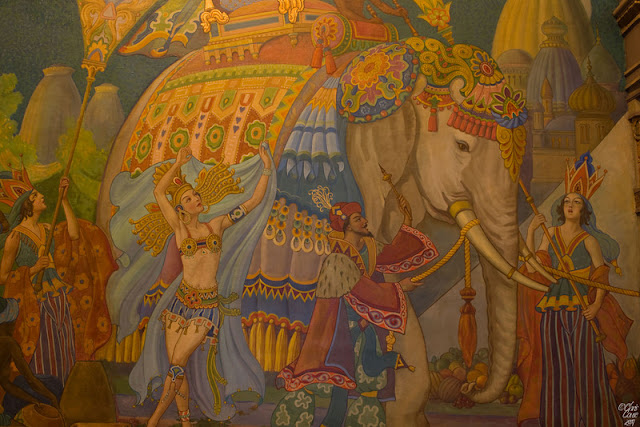 There is a huge mural taking up one wall of the main lobby, and the whole thing was once illuminated by a chandelier which Louis Tiffany had originally designed for the Vanderbilts. Unfortunately the chandelier was sold when the theatre closed in the mid 70's, its' been replaced by a smaller moorish style fixture, which matches the decor, but it's not the same. 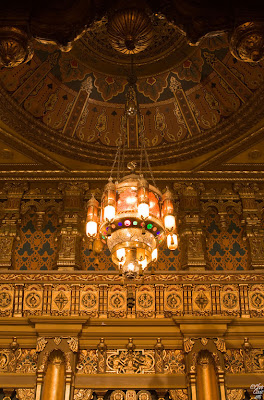 Advertised as “the last word in theatrical ornateness and luxuriousness,” the grand opening drew hundreds of curious patrons eager to see the newest and most anticipated addition to Syracuse’s motion picture emporiums. Twenty five cents not only provided admission to a silent movie, but also transcended them into a world of colorful murals, exquisite lighting, and fascinating furnishings. This was more than just a night at the movies, it was a major event.(5) 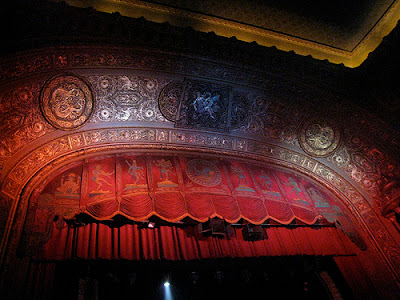 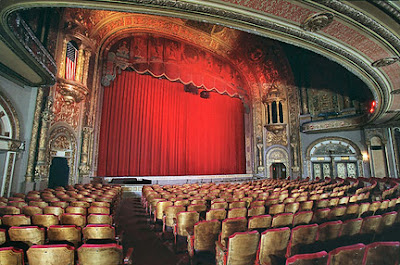 Audiences were ushered into Lamb's exotic world through the main lobby, which boasted a chandelier designed by Louis Tiffany for Cornelius Vanderbilt's mansion, and the grandest of the theatre's several huge murals.  The Musician's Gallery, located over the front doors, featured quartet serenades as intermission entertainment during the '30s.  Patrons who ascended the grand staircase reached the promenade lobby, where they delighted in finding a fishpond with a Japanese pagoda fountain.  The main auditorium, which houses 1,832 of the theatre's 3,300 seats, was decorated in rich reds and golds and accented with wall ornaments throughout. 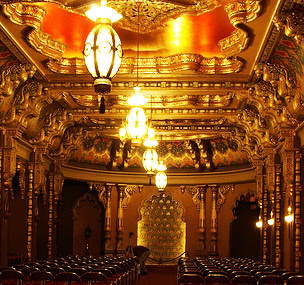 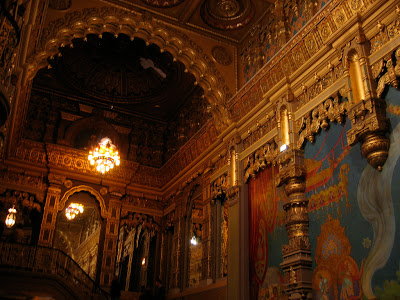 The 1,400-pipe Wurlitzer organ offered its own exotic flavor, treating patrons to such sounds as a glockenspiel, marimba, bird whistles, hoof beats and surf sounds.

Crowds flocked to Loew's State throughout the Depression and World War II and yet, like so many other great movie palaces (including six razed in Syracuse), the theatre's attendance began dropping steadily in the '50s.

During the first performance of "Love Me or Leave Me" starring Doris Day, being presented in CinemaScope and 6-track Sterophonic sound,  midway thru the film, Doris Day is presented live, singing "Shaking the Blues Away".
According to Peter Baum of SALT, Loew's State was the first great "Oriental-style" movie theater, predating Grauman's Chinese Theater in Hollywood, California.

By 1975, it seemed that the pride of Syracuse would fall prey to the wrecker's ball to allow for parking/shopping complex.  However, in 1977, a group of concerned citizens banded together to form the Syracuse Landmark Theatre, or SALT.  SALT had the local landmark placed on the National Register of Historic Places, opening the door to government funding. By the end of 1977, the group had acquired the theater and began restoring its original splendor.
Shortly after renovations were completed in 1978, employees began reporting the apparition of a pale young lady, dressed entirely in white, in the upper balcony. Sometimes she seemed so real that ushers asked her to leave the area, only to see her disappear from sight. Psychics say she is a spirit of someone who worked at the theater and spent all her life wanting to be an actress. The ghost of Oscar Rau, who worked as an electrician at the theater, has been observed near the lightboard. A ghostly blue light has been seen by many witnesses near the banister that runs along the back of the auditorium, in the catwalk access hallway, and on the stairs leading to the downstairs dressing room. Psychics say the Turkish Room, also known as the Red Room, is haunted by the passions of a violent love triangle. Scary events have occurred in the basement catacombs, but the most negative area in the theater is the Walnut Room. Employees report feeling extremely uncomfortable in the room, where fires have erupted and unusual cold spots appear.(1)