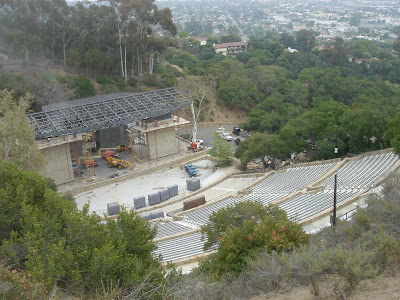 It was carved into the hillside, built with Works Progress Administration (WPA) funds in 1936 as part of F.D.R.'s New Deal, the County Bowl's first three and half decades saw it used primarily as a performance venue for the Santa Barbara's annual Old Spanish Days, more popularly known as Fiesta, with an occasional concert thrown in here and there. It was originally built as the home for the final pageant of Old Spanish Days.
The Bowl is nestled in a natural amphitheatre setting amongst beautiful specimens of Pacific Oaks, a few minutes from downtown Santa Barbara.

In the early 1970's, promoter Sepp Donahower, one of the principals (along with Marc Chase and John Van Hamersveld) of the legendary Pinnacle Dance Concerts company, initiated its renaissance; he relates: " While running Pacific Presentations (the precurser of Avalon Attractions) and doing shows at UCSB and the Arlington Theatre in the early 70's in Santa Barbara, I stumbled on to the old County Bowl that was used once a year for Old Spanish Days Fiesta. I had became friends with Barton Clap, the manager of the Coral Casino Beach & Cabana Club and the head of The Old Spanish Days Fiesta Organization, who asked if I was interested in doing shows in the old County Bowl. The first time I walked into the Santa Barbara County Bowl, it was overgrown with weeds and needed its annual cleaning before the Fiesta. I immediately saw it as one magic venue. We immediately made a deal to produce the shows there and started rolling them in.......The Band, Bob Marley, Fleetwood Mac, The Eagles, Jimmy Buffett, and on and on....it was now on the map and loved by all.

After Pacific morphed into Avalon, Avalon continued with it for awhile but eventually it ended up under the control of some local promoters," who eventually negotiated a deal with Nederlander.(1)

The amphitheater's original stage was a revolving wooden stage that washed out during El Niño rains in 1939.
The stage was replaced with a concrete slab that was in place until renovation in 2001.
Built in rustic wood and stone, it's a beautiful venue. Surrounded by towering trees and open the stars, it offers a view of downtown Santa Barbara twinkling below and beyond that, the ocean.
Booked exclusively by Nederlander Concerts in Los Angeles, the Bowl hosts primarily popular music concerts.


Jerry performed here on
10/13/74 Merl Saunders (Maria Muldaur was a guest)
John Conroy who attended October 13, 1974 Etta James' opening act for Jerry Garcia, "Etta James was also on the bill that day and I recall that she was serving time in prison and was brought to the show from prison (some sort of work release) and returned to jail when the show was over."

Posted by Jerry's Brokendown Palaces at 9:08 AM

Email ThisBlogThis!Share to TwitterShare to FacebookShare to Pinterest
Labels: S-Venues