Originally the building was The Sweden House, an all-you-can-eat smorgasbord.
The Saddle Rack originally opened on Aug 13, 1976.
Hank Guenther who was the original owner of The Saddle Rack and the owner of the 6 and a half acres and building in San Jose which The Rack stood. Originally Mr. Guenther came to San Jose in the late 1960’s to run The Sweden House, an all-you-can-eat smorgasbord, eventually changing the name to Bit O’ Sweden.(1)

The land now has an apartment complex on it.

Getting an offer he couldn’t refuse, Gary Robinson purchased the rights to the Saddle Rack name from Mr. Guenther and along with Andy Buchanan reopened The Saddle Rack in Fremont, CA in April 2003.(1) 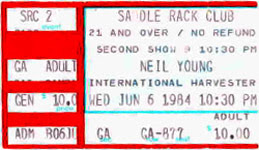 1.)^http://www.thesaddlerack.com/pages/about-us.php
Posted by Jerry's Brokendown Palaces at 9:00 AM

Email ThisBlogThis!Share to TwitterShare to FacebookShare to Pinterest
Labels: S-Venues