On Nov. 27, 1910, Pennsylvania Station opened in New York City, with trains entering Manhattan for the first time by way of tunnels under the Hudson River.
The original structure of Penn Station was made of pink granite and was marked by an imposing, sober colonnade of Doric columns. The colonnades embodied the sophisticated integration of multiple functions and circulation of people and goods. McKim, Mead and White's Pennsylvania Station combined frank glass-and-steel train sheds and a magnificently proportioned concourse with a breathtaking monumental entrance to New York City. From the street, twin carriageways, modeled after Berlin's Brandenburg Gate, led to the two railroads that the building served, the Pennsylvania and the Long Island Rail Road. Its enormous main waiting room, inspired by the Roman Baths of Caracalla, approximated the scale of St. Peter's nave in Rome, expressed here in a steel framework clad in plaster that imitated the lower wall portions of travertine. It was the largest indoor space in New York City and, indeed, one of the largest public spaces in the world. Covering more than 7 acres (2.8 ha), it was, said the Baltimore Sun in April, 2007, “As grand a corporate statement in stone, glass and sculpture as one could imagine”.[16] In her 2007 book, Conquering Gotham: a Gilded Age Epic – The Construction of Penn Station and Its Tunnels, historian Jill Jonnes called the original edifice a “great Doric temple to transportation”.[17]

Alexander J. Cassatt, the president of the Pennsylvania Railroad, was determined to “somehow send the Pennsylvania Railroad across the mile-wide Hudson River and bring its elegant gleaming passenger trains triumphantly into the heart of Manhattan,” writes Jill Jonnes, author of “Conquering Gotham: A Gilded Age Epic: The Construction of Penn Station and its Tunnels.”  His first project, later abandoned, was to construct a huge bridge across the Hudson. In 1901, he announced plans to enter New York City by tunneling under the Hudson, an ambitious and incredibly expensive project. At the center of his grand project was Pennsylvania Station, to be built on Seventh Avenue just south of 34th Street.  Cassatt hired architect Charles McKim of the French Beaux Arts school to design the station. Though neither Cassatt nor McKim was alive when it opened in 1910, they left an architectural masterpiece that changed train travel in New York.  “Penn Station was the greatest of them all,” says Paul Goldberger, architecture critic for The New Yorker. “Penn Station emerged out of a time when the whole act of travel had a kind of ritual ceremony to it. The beauty, really, of coming into a city or leaving a city with a great piece of architecture, a great gateway was really what it was.”

During the more than half-century timespan of the original station under owner Pennsylvania Railroad (1910–1963), scores of intercity passenger trains arrived and departed daily, serving distant places such as Chicago and St. Louis on “Pennsy” rails, and beyond on connecting railroads to Miami, Florida, and the west. In addition to the Long Island Rail Road, other lines using Pennsylvania Station during that era were the New Haven and the Lehigh Valley Railroads. For a few years during World War I and the early 1920s, arch rival Baltimore and Ohio Railroad passenger trains to Washington, Chicago, and St. Louis also used Pennsylvania Station, initially by order of the United States Railroad Administration (USRA), until the Pennsylvania Railroad terminated the B&O's access in 1926.[18] The station saw its heaviest usage during World War II, but by the late-1950s intercity rail passenger volumes declined dramatically with the coming of the Jet Age and the Interstate Highway System.
The Pennsylvania Railroad began looking to divest itself of the cost of operation of the underused structure, optioning the air rights of Penn Station in the 1950s.

Plans for the new Penn Plaza and Madison Square Garden were announced in 1962. In exchange for the air-rights to Penn Station, the Pennsylvania Railroad would get a brand-new, air-conditioned, smaller station located completely below street level at no cost, and a 25% stake in the new Madison Square Garden Complex.

The demolition of the original structure — although considered by some to be justified as progressive at a time of declining rail passenger service — created international outrage.[16] As dismantling of the grand old structure began, The New York Times editorially lamented:
"Until the first blow fell, no one was convinced that Penn Station really would be demolished, or that New York would permit this monumental act of vandalism against one of the largest and finest landmarks of its age of Roman elegance.[19]"
Its destruction left a deep and lasting wound in the architectural consciousness of the city. A famous photograph of a smashed caryatid in the landfill of the New Jersey Meadowlands struck a guilty chord. Pennsylvania Station's demolition is considered to have been the catalyst for the enactment of the city's first architectural preservation statutes. The sculpture on the building, including the angel in the landfill, was created by Adolph Alexander Weinman. One of the sculpted clock surrounds, whose figures were modeled using model Audrey Munson, still survives as the Eagle Scout Memorial Fountain in Kansas City, Missouri. There is also a caryatid at the sculpture garden at the Brooklyn Museum, and 14 of the 22 original eagle ornaments still exist.[20]
The public in New York and around the world was outraged that such a beautiful and historic structure could be demolished. As a direct result, the New York City Landmarks Preservation Commission was established to protect historic buildings.   “Largely because of the destruction of Penn Station, a million buildings nationwide have been saved,” writes CBS News. “One thousand in New York City alone have been spared.”
The Penn Plaza complex remains one of the most controversial in New York City history because it involved the destruction, beginning in 1963, of the original McKim, Mead and White-designed Penn Station (1910), a revered piece of New York architecture. Its replacements were what architects and civic purists regard as mediocre office and entertainment structures.
The demolition of the first Penn Station led to the city's landmarks preservation movement and helped save another landmark of railway architecture, Grand Central Terminal.[2]
What also earned the Penn Plaza critics' ire was the relatively secretive way the decision to raze the old Penn Station came about, even though it was well known that the station's owner, the Pennsylvania Railroad, was losing significant amounts of money and viewed the sale of the Penn Station air rights as a financial boost. (The railroad eventually failed anyway, after its disastrous merger with the New York Central).
Still, with the sports arena and railroad station at its hub and 34th Street retailers (including Macy's) nearing the complex, Pennsylvania Plaza remains one of the busier transportation, business and retailing neighborhoods in Manhattan.
Additional controversy has been stirred up due to the proposed, and recently approved demolition of Hotel Pennsylvania. The hotel was built back in 1919 for the original Penn Station as place to house the exiting passengers of the station. Due to the controversy of Penn Station's demolition, and the relation the hotel has with the station, some feel that the demolition of the hotel will be as if New York were demolishing Penn Station all over again.

The numbering of the Penn Plaza addresses around the area does not follow a consistent pattern.[1] 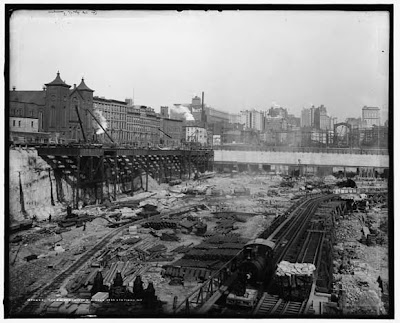 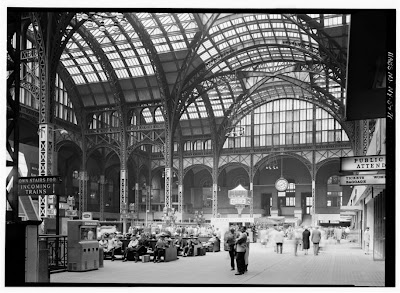 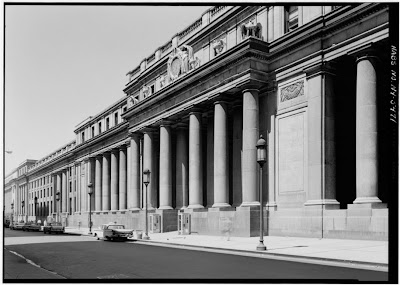 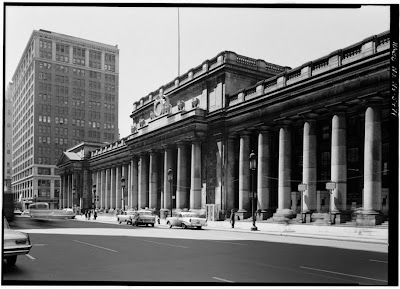 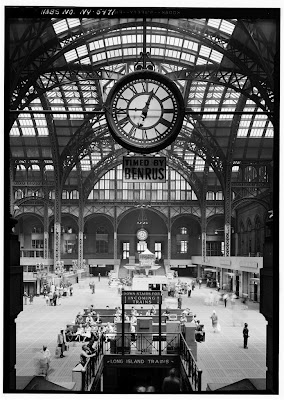 I've limited this page to the address where Madison Square Garden IV is located but here's the short history of the Company itself.

Located at 8th Avenue, between 31st and 33rd Streets, situated on top of Pennsylvania Station. MSG IV opened on February 11, 1968, it is the longest active major sporting facility in the New York Metropolitan area, and is the fourth incarnation of the arena in the city. One Penn Plaza stands at its side. 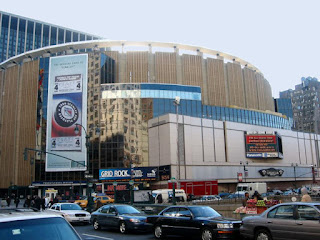 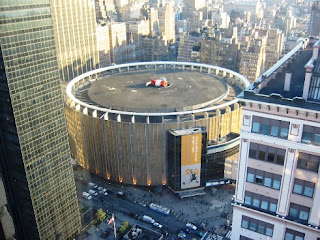 “The World’s Most Famous Arena” derives its name from the park where the first two gardens were located (Madison Square) on Madison Avenue at 23rd Street.
Madison Square Garden IV, designed by Charles Luckman Associates. This may surprise no one, but their other claims to fame include designing both Kennedy Space Center in Florida and Johnson Space Center in Texas. The firm also designed Los Angeles's convention center which was partially demolished over a decade ago to make room for the Staples Center.
It was opened after the Pennsylvania Railroad tore down the above-ground portions of Pennsylvania Station and continued railway traffic underneath. The new structure was one of the first of its kind to be built above the platforms of an active railroad station. It was an engineering feat constructed by Robert E. McKee of El Paso, Texas.
Public outcry over the demolished Beaux-Arts structure led to the creation of the New York City Landmarks Preservation Commission.

The Knicks won the NBA Championship here in 1970.

Many large popular-music concerts in New York City take place in Madison Square Garden. Particularly famous ones include George Harrison's Concert For Bangladesh, The Concert for New York City following the September 11 attacks and John Lennon's final concert appearance (during an Elton John concert on Thanksgiving Night, 1974) before his murder in 1980.

George Harrison on guitar and Ringo Starr on drums belt out some of the songs made famous by the Beatles before capacity crowd attending afternoon concert for benefit of East Pakistan refugees at Madison Square Garden. The Concert For Bangladesh was the event title for two benefit concerts organized by George Harrison and Ravi Shankar, playing to a total of 40,000 people at Madison Square Garden. Organized for the relief of refugees from East Pakistan (now independent Bangladesh) after the 1970 Bhola cyclone and during the 1971 Bangladesh atrocities and Bangladesh Liberation War, the event was the first benefit concert of this magnitude in world history.
Olivia Harrison at Madison Square Garden where she was presented with a plaque honoring her husband, Beatle George Harrison, and commemorating the 35th anniversary of his Concert for Bangladesh. The plaque is permanently installed in the arena's "Walk of Fame." 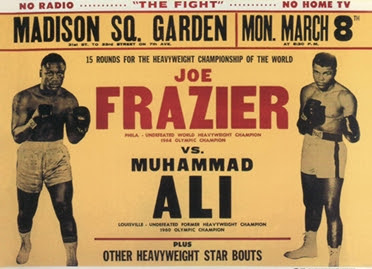 August 30th, 1972 John Lennon recorded two concerts at MSG to raise money for charity and on November 28th, 1974 he joined Elton John on stage for what would be his final major performance.

In 1991, Garden owners spent $200 million to renovate facilities and add 89 suites. The process involved hundreds of upper-tier seats being removed to make way. The project was designed by Ellerbe Becket.

The Rolling Stones performed at The Garden a total of 24 times between the years 1969 and 2006.


Posted by Jerry's Brokendown Palaces at 9:00 AM