Harlan & Hollingsworth Corp. of Wilmington, Delaware built the as the 202-foot "City of Wilmington" for the Wilson Line in 1910 with triple expansion engines. It was berthed at Pier 5 on Pratt Street, Baltimore in it's early days. It used to sail to Betterton, where there was an amusement park. 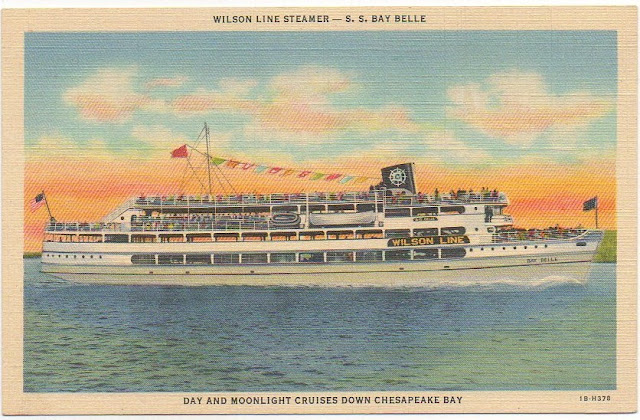 Totally rebuilt and modernized as the S.S. Bay Belle in 1941 for Chesapeake Bay service.(2)
Known as "the largest marine ballroom afloat.

She passed from Wilson Line in the mid-1960s to various operators in New York City for excursion service to Rockaway Beach and up the Hudson and into Long Island Sound to New England.

Receiving a new paint job at least, the vessel moved to the "Sound Line" at some point.


The Jackie Curtis revue was one of the support acts for the Manhattan Transfer when they performed on the S.S. Bay Belle on July 27, 1973. (The other support act was another Warhol star, Eric Emerson.)(1)

Later known as the S.S. Duchess, the ex-Wilson Liner "City of Wilmington", is now laid up at Brooklyn Navy Yard in New York City.(2)


Jerry performed on this vessel on
9/5/73 Merl Saunders (private Hell's Angels party and first time the guitar Wolf was played, Wolf's first appearance with the Grateful Dead was at the Nassau Coliseum on September 7th.) (The ship was called S.S. Bay Belle at this time.)
There was a movie made of this adventure called Hell's Angels Forever. It's a semi-documentary directed by Richard Chase, Leon Gast, Kevin Keating, and Lee Maden, about the Hell's Angels.
Lee Madden (I) (1926–2009) Director | Writer | Producer
Writer/director/producer Lee Madden was born in 1926 in Brooklyn, New York City. Madden's debut film was the enjoyable biker crime caper heist yarn "Hell's Angels '69;" this movie featured various members of the real Oakland Hell's Angels led by then president Sonny Barger and was the sole motion picture the motorcycle club directly participated in. Lee's other films include the equally entertaining biker outing "Angel Unchained," the creepy horror opus "The Night God Screamed," and the fun drive-in exploitation romp "The Manhandlers." Moreover, Madden also directed episodes of the TV series "The Most Deadly Game," "Bearcats!," "Cade's County," and "The New Perry Mason." His company Lee Madden Associates was a major supplier of industrial movies and TV commercials for primarily automobile companies. Lee's son David is the executive vice president of programming at Fox Television Studios. Madden died at age 82 of complications from pneumonia on April 9, 2009 in Camarillo, California.(6)

Kevin Keating's directing debut was "Hell's Angels Forever" in the 1970's.  He shot footage of Muhammad Ali for director Leon Gast in Gast's 1996 Ali documentary "When We Were Kings".  Mr. Keating was the cinematographer on two of Barbara Kopple's films ("Harlan County, U.S.A." and American Dream".) Giuliani Time was just released.(4)

9/15/76 JGB (private Hell's Angels party benefit for Sandy Alexander Legal Fund) (The ship was rebuilt and renamed S.S. Duchess)
"Loading at Battery Park". "
After her second attempt to dock at the pier, we boarded. She had a glass covered engine room allowing you to see the inner workings of the hard pounding steam engine. This, put together with the band's rockin' rhythm and you can imagine the venue."(3)
"When we hit the wake from another boat Jerry started bending his notes to go with the rockin.
Thanks to all for remembering this show. Up the Hudson to GW Bridge, down then up East River under Brooklyn Bridge."(7)