When Ritchie Coliseum opened in 1930, the seats were cast-in-place concrete bleachers.
Ritchie Coliseum, named after then Maryland governor Albert Cabell Ritchie, was built in 1930,[1] at a cost of $200,000,[2] to replace a facility known as "the Gymnasium" as the home arena for the basketball and boxing teams.[1] The arena was built by the H. D. Watts Construction Company, which was owned by Harry Watts, an alumnus who played as a fullback on the football team from 1901 to 1903.[3] The building hosted the basketball and boxing teams until 1955, when it was replaced by Cole Field House centrally located on the campus.[4]
For 26 years at Ritchie Coliseum, basketball games were held immediately before or after boxing matches.[1][2]

This historic building was renovated in Spring of 1997 and is a multipurpose campus facility.
The floor dimensions are 11,000 ft2 (1,021.9 m2) with a surface of maple hardwood. The official seating capacity was originally 1,500. Currently, there are 1,900 total seats. 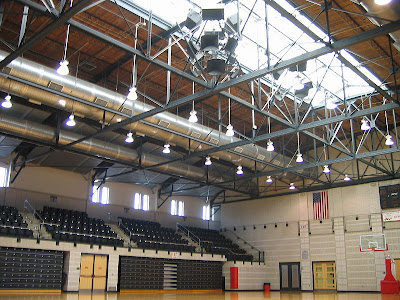