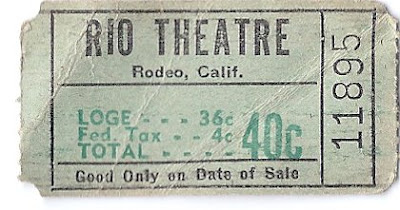 This was a theater located in the town of Rodeo, on the main street in it's business district. 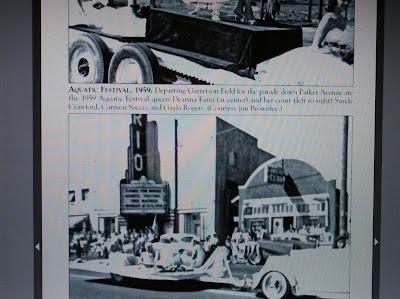 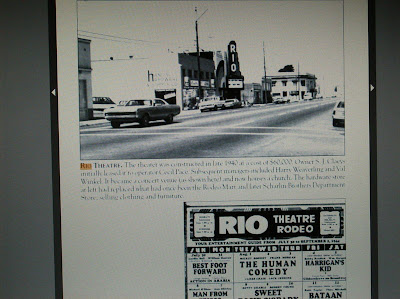 In 1968-69 this theater was used to host rock shows. I remember seeing Al Kooper, Michael Bloomfield (recall Super Session LP) with Nick Gravenites. With all the seats removed, this was a great underground scene. There was quite a crowd, so I was hoping that this would turn into something like the Fillmore (SF). Too bad the owners could not continue as a rock concert venue.(2) 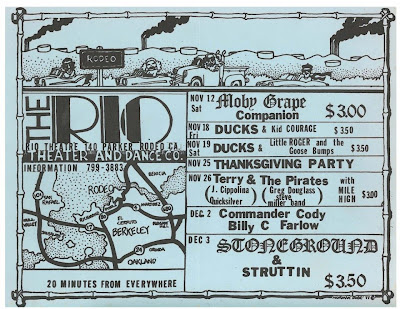 "While they were up on the top of that structure one or two of the older locals that were around in the original construction days (1939) dropped by and told tales of one of the workers falling to his death "right here" pointing to a spot on the floor right below the scaffolding. Fact or fiction? Don't know but I heard it from more than one of these visitors that often walked in to check on our progress"(4)

Maria Muldaur (Midnight at the Oasis fame) dedicated a song on one of her albums called “rio” as she used to attend this theatre as a child. 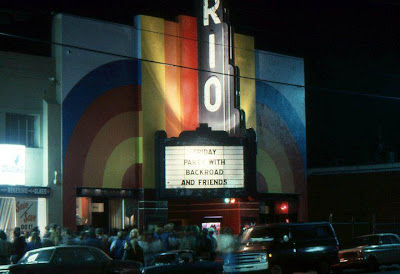 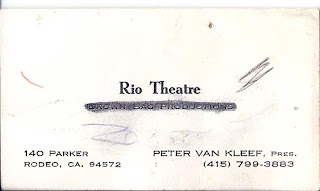 John Cippolina played the same night that Michael Bloomfield and a stage FULL of other greats.(3)

At one of the Elvin Bishop shows at the Rio Elvin and the sax player (Terry Hanks?) were wireless and walked through the dance floor , up the Isles and up on the bar raising the roof!

The last movie shown was "Gone With The Wind" and so was The Rio Theater as a movie theater maybe forever. 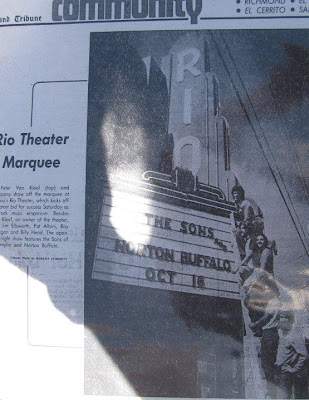 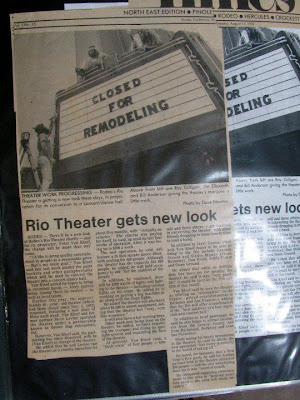 Here is an article from the Oakland Tribune dated 2/9/76:
REBIRTH OF THE RIO THEATER
Two young men with unbridled optimism and a fondness for fantasy
plan to reopen the Rio theater here, probably on Friday night. But the Rio, closed for more than three years, will not be just a movie
house, according to Peter Van Kleef and Steve Levine. It also will present live entertainment, lectures and educational programs.
Van Kleef also wants to hold music programs at the 430 seat Rio “because it’s the ideal situation for small concerts”. The Rio has been closed since December 1972, when its last operator died.
The theater was built and opened in 1940 and flourished through World War II and into the 1950s before the advent of Interstate 80. There is no movie theater in west Contra Costa north of El Sobrante, Levine noted. He believes the Rio’s variety of offerings will attract people from as far away as Vallejo. Walnut Creek and Pleasant Hill.

Closed for good in 1980, a few members of this group have gone to the old Rio Theater location to discover that it is a Church these days. It has been a church for a few years and will not be a night club again until some time after the second coming.(1) Today, the theater is used as a church while there are many vacant storefronts in the surrounding area.


I went to the Rio theater once back in the late 60’s to see The Sons of Chaplain, a great rock group. Jerry Garcia was onstage with them, it was a good concert. It was a small theater the stage had pretty red draperies and gold tassles hanging down on the sides. I remember when Larry Singleton was paroled to Rodeo, the residents stirred up a furor, and the news showed the Rio marquee and it said “get out”(6)