Capacity 200
Before it was Lion's Share,  it was a hardware store. "Highland Hardware". That little district was referred to as Highland from the 1910's thru the 40's.
San Anselmo was home to Marin's premiere rock venue located near United Market after it's move from Sausalito. 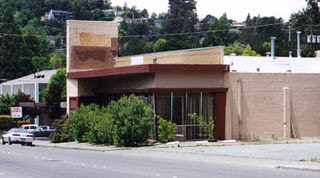 The Lions Share was a tiny club at 60 Red Hill in San Anselmo. It was mainly a musicians hangout.
Lion's Share was on the north side of Redhill Ave. (Miracle Mile), in between what is now Redhill Auto and what was Hatt's Custom Choppers. It's a "modern forties retail" looking, one story. It's got a weather-beaten coat of green paint on it now. Lots of oleander growing in front. Just a block toward San Rafael, from United Market.

It's now some sort of manufacturing facility or a machine shop of some kind. Lots of big, floor-standing tools that I don't recognize. 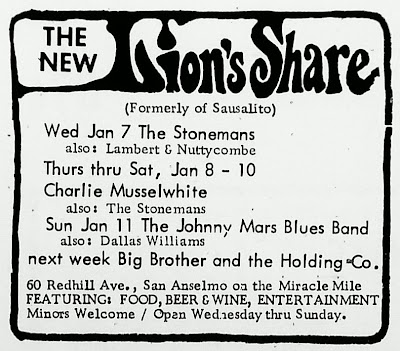 The atmosphere is dark with beam ceilings, brick walls, tiffany lamps and relaxed. There are some problems with the sound system, but none with the performers. Saturday night, for example, the bill included guitarist Jeffrey Cain, Universal Medicine, and Dan Hicks. All were smooth, accomplished acts that worked well with a surprisingly full house.

Throughout much of 1970, the house band had been called Nu Boogaloo Express, featuring Mike Finnegan or Bill Champlin alternating on keyboards and vocals, and other local players like Danny Nudalman (guitar) Dave Schallock (bass or guitar) and Bill Vitt (drums), but I do not know if they were still featured there. Local residents like Phil Lesh or Van Morrison regularly hung out or played there.

When Janis Joplin died, she left enough money in her will for a funeral party. It was held here at The Lion's Share on October 26, 1970. The Grateful Dead performed. 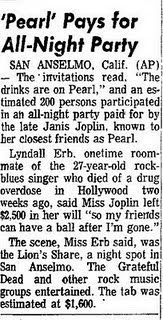 Michael Considine was the original owner. "In November 1968, the main complaint from the neighbors was noise, but the understood beef was the long haired types who hung out at the Share. Considine and his friends packed the Sausalito Council meeting and convinced the village elders that he was not too noisy. They voted 5-0 to keep him open. Mysteriously, the next night the Lion's Share burned down.
In July1969 Considine reopened the Lion's Share at the 60 Red Hill Avenue address. The atmosphere is dark-with beam ceilings, brick walls, tiffany lamps-and relaxed."[11]
"Nobody minded the bare tables and floors, the wrought iron chairs, a bar that was not fifteen feet from the stage, which the owner refused to stop operating when the bands played, so that the ringing of the cash register became an integral part of the music. The owner at that time was a fleshy older man, not a cigar smoker, but he wore t-shirts that smelled and showed his beer belly. It was a cold room to play in, except that it was one of the few clubs North of San Francisco in Marin County that hired the hip acts and paid them and that had a sound system and piano."[14]
It was mainly a musicians hangout. Mike Hunt and Michael Considine were the owners. Throughout much of 1970, the house band had been called Nu Boogaloo Express, featuring Mike Finnegan or Bill Champlin alternating on keyboards and vocals, and other local players like Danny Nudalman (guitar) Dave Schallock (bass or guitar) and Bill Vitt (drums), but I do not know if they were still featured there. Local residents like Phil Lesh or Van Morrison regularly hung out or played there. His parents owned a music store in Fairfax.
Various groupings of the Sons and their friends played just about every Sunday night under several names, such as the Nubugaloo Express.(2) One night The Sons were smoking up on the hill behind the club and the cops came up to bust 'em. Bill Champlin told the cops that they could arrest him, but that they (the cops) just HAD to smoke that pot---it was too good to waste!
Janis Joplin was a regular on "Tuesday Audition Night" where she would jam with whatever band was playing.
"On one particularly memorable night, Champlin and The Sons (in their ‘Yogi Phlegm’ incarnation) launched into a wild fusion jam that cleared out every patron and employee in the bar, leaving only Phil Lesh to dance by himself at the bar."[7]
It was in business at least until April 25, 1975 when Kathi McDnald and Quantus performed there.
In later years after being Lion's Share, it was a health food market called Campolindo. Then it became some sort of manufacturing facility or a machine shop of some kind. Lots of big, floor-standing tools.
As of May, 2011, the place is now an optical shop.
The marquee is still clearly visible while driving between San Rafael and San Anselmo on the Miracle Mile.

"It was this crowded hot room with kind of a low ceiling. For some reason I was walking down the street about two years ago and I went by there and said, “Hey, this is the Lion’s Share!” I walked in and it (had become) this metal refinishing shop or something. I asked them, ‘Do you have any idea what used to go on in here?’ … I said, ‘Mose Allison was in this room. We had a party for Janis Joplin after she died in this very room and everyone was snorting coke in the bathrooms. It was insane.’[
In later years after being Lion's Share, it was a health food market called Campolindo.
The it became some sort of manufacturing facility or a machine shop of some kind. Lots of big, floor-standing tools.

8/1/70 New Riders Of The Purple Sage (electric) and Grateful Dead[3](acoustic only)
Grateful Dead Acoustic opened for The New Riders.[6]
Jerry's 28th birthday.
"The acoustic Grateful Dead played a number of shows at the Lion's Share. They played two or three nights in a row, on a weeknight in the middle of the Summer of 1970. She knows--she went. These shows were utterly unpublicized, and only friends of the band were given the heads up."[26]

10/26/70 Grateful Dead (Janis Joplin's wake)
Janis Joplin left enough money in her will for a funeral party. The invitations read, "The drinks are on Pearl."

9/24/71 early and late Merl Saunders
(Early) Save Mother Earth, Imagine, One Kind Favor, I Was Made To Love Her, Baby What You Want Me To Do?, Biloxi
(Late) Hi-Heel Sneakers>Man-Child, Summertime>That's The Touch I Like>Annie Had A Baby, WPLJ
Jerry Corbitt, Billy Cox and Charlie Daniels opened.

1/14/72 Merl Saunders[19]
1/15/72 Merl Saunders[19]
I: How Sweet It Is, Save Mother Earth, One Kind Favor, Expressway, Mystery Train
II: It Takes A Lot To Laugh It Takes A Train To Cry, I Was Made To Love Her, That's The Touch I Like, Who's Loving You Tonight, Man-Child, She Even Woke Me Up To Say Goodbye, Hi-Heel Sneakers, Tupelo Honey, That's All Right Mama

1/20/72 Merl Saunders
I: That's The Touch I Like, Man-Child, When I Paint My Masterpiece, Expressway, That's All Right Mama
II: How Sweet It Is, It Takes A Lot To Laugh It Takes A Train To Cry, My Problems Got Problems, Lonely Avenue>Save Mother Earth, Imagine, The Night They Drove Old Dixie Down

3/2/73 Old And In The Way
Goin' To The Races, Dark Hollow, Katie Dear, New Camptown Races, Two Little Boys, Home Is Where The Heart Is, Down Where The River Bends, Knockin' On Your Door, Old & In The Way Breakdown
The Rowan Brother opened.
KSAN FM broadcast.
Jerry plays a RB-250 Gibson Mastertone banjo.[12]
"Marin County's newest bluegrass band, Old and In the Way, was playing at the Lion's Share in San Anselmo, California, and smoothly moving into "The Hit Parade of Love" when Jerry Garcia gave it away: It was their first time out. He had gone into his banjo solo before he realized he wasn't plugged into an amplifier. He grinned and quickly took a long step up to the microphone so the folks in the back could hear. The goof was understandable, because Garcia, along with the rest of the Grateful Dead, had only the day before returned from a two-week tour of the Midwest."[4]

Interviewed for Robert Greenfield's Dark Star book, Pete Rowan remembered the same moment at the same show:
"I remember Garcia's first solo at our first gig at the Lion's Share in San Anselmo. I don't know if it was a sight gag or what, but he was looking for knobs to turn on his banjo... He was standing there turning knobs on his banjo that he did not have."

3/3/73 Old And In The Way
The Rowan Brothers opened.
Jerry plays a RB-250 Gibson Mastertone banjo.[12]
“I was the cook at the Lion’s Share around 1972 – Mike (Considine) was the owner and he needed to serve food so minors could be allowed in (mo money) he gave me a little room to the side of the liquor bar with a serve through window, and a cutting board – he explained the minor situation – and didn’t want to be bothered by anything food related after that. The music and the scene was just so very hip. Van Morrison was there at least monthly it seemed – Sonny Terry & Brownie McGee – Herbie Hancock – Sun Ra – Jerry Garcia picking in a bluegrass band called ‘Old and in the Way’ – I cooked and served Jerry a cheeseburger at an afternoon sound-check – a very big moment for me."[25]

7/5/73 Merl Saunders
I: After Midnight, Someday Baby>She's Got Charisma, That's All Right Mama, The System, The Night They Drove Old Dixie Down
II: Second That Emotion, My Funny Valentine, Finders Keepers, Money Honey, Like A Road>Merl's Tune, Jam, How Sweet It Is
"I think it's Luis Gasca on trumpet. He was signed to Fantasy Records at  the time (same label Fire Up and Heavy Turbulence were released on) & in one tune on this set he quotes John Coltrane's A Love Supreme which was the first track on his 1974 Fantasy album Born To Love You.﻿"[22]

"This Lion's Share gig (their closing week) was the first week of July, 1975. The Garcia-Saunders Band played two nights; the last night featured Elvin Bishop and John Lee Hooker. Along with Hooker doing his patented take-no-prisoners thing, Bishop and a couple other guitar players pulled of a sublime version of "East-West" in the closing set."
I'm still trying to find the exact closing date for the Lion's Share, it was some time in 1975. I saw/heard Garcia & Saunders play on two consecutive nights there, during closing week. There were not very many people there, that's the funny part. And I can't find any reference to them doing those gigs anywhere. But it did really happen!"[23]

The Garcia/Saunders Band performed at the Great American Music Hall on July 4, 5, 6.