Bill Putnam is considered to be the "Father of Modern Recording." He is acknowledged to be the first person to use artificial reverberation for commercial recording. He also developed the first multi-band equalizers, and with his company Universal Audio, was responsible for the development of classic equipment like the Urei 1176LN and Urei Time Align Monitors. He was involved in the early development of stereophonic recording and founded studios in Chicago, Hollywood and San Francisco. During the 1950's, Putnam's engineering credits grew quickly working with such artist's as Patti Page, Vic Damon and Dinah Washington. A number of firsts occurred at the Chicago based Universal Recorders: the first use of tape repeat, the first vocal booth, the first multiple voice recording, the first use of 8-track recording trials and experiments with half-speed disc mastering.
With his Chicago studio so successful, Putnam's clients: Nelson Riddle, Mitch Miller and Quincy Jones urged him to open a facility on the west coast.
More hit records have been produced at this studio than any other in the world.

Finally in 1957, he sold his interest in Universal Recording and started a new company called United Recording Corp. and moved to Hollywood, taking over a building at 6050 Sunset and started new construction on new studios. Stereo was taking off and Putnam was determined to incorporate as many technological innovations in to the new complex as possible. In 1961, Western Recorders at 6000 Sunset was acquired and remodeled and incorporated into the complex with the facilities being known as United Western Recorders.
Western Recorders Studios at 6000 Sunset hosted the who's who of music in front of and behind the glass: Bones Howe, Wally Heider and Lee Hirschberg were on staff while artists like Bing Crosby, Frank Sinatra, Dean Martin, Sammy Davis, Nat King Cole, Johnny Mercer and Ray Charles were recording the hits of the day. Ray Charles' classic, "I Can't Stop Loving You" was recorded here as well as Sinatra's,"It Was A Very Good Year," and the legendary "Pet Sounds" album, which was the inspiration for The Beatles' Sgt. Peppers album, was recorded here also. 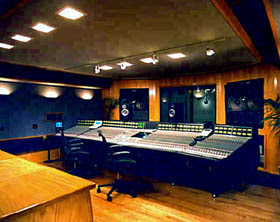 In 1977, the United Recorders building at 6050 was purchased from Bill Putnam by Allen Sides. Shortly thereafter, the Western Recorders building at 6000 Sunset was added to the complex that became Ocean Way Recording.
Cello Studios assumed ownership of the building located at 6000 Sunset in January 1999. The equipment inventory was also purchased from Ocean Way Recording at the time. The collection of rare vintage microphones alone is irreplaceable, not to mention the outboard gear,.

Here was where Sinatra sang "That's Life", and here was studio 2 where Ricky Nelson worked with his dad, and the Righteous Brothers cut "Soul and Inspiration" with engineer Jimmy Lockert.
Totally boring, predictable, Studio 3 at Western Recorders was in fact one of the Major Sacred Spaces of the recording world between 1964 and 1968. It was the home studio for a number of key rock evolutionaries; the most notable would include the Mamas and Papas, the Beach Boys, the Association, Jan & Dean, Johnny Rivers, the Turtles (sometimes), or, in another way of looking at it, anyone Lou Adler was managing or producing, Bones Howe was engineering, Jan Berry was scamming, or any side project of a Wilson - dad or boys.
Harper's Bizarre's "Feelin' Groovy" was recorded here on 11/25/66 and March 8, 1967 and March 13, 14 and 17, 1967.
In 1989, the studios were acquired by Allen Sides and renamed Oceanway.
In 1999 Rick Adams purchased the studios and renamed it Cello. The studios themselves have not been altered in any way since Bill Putnam's original design.
At the end of 2003 the name was changed back to Western Recorders.
In January 2006 it was acquired by Doug Rogers of EastWest, the #1 sounds producer in the world.
A few of the artists who have recorded at Western:
The Rolling Stones, Frank Sinatra, Madonna, Dean Martin, Sammy Davis Jr., Nat King Cole, Ray Charles, The Beach Boys, Rod Stewart, Elton John, Tom Petty, Eric Clapton, Alanis Morissette, Natalie Merchant, R.E.M., Bette Midler.
Jerry recorded here in
June, 1966 Scorpio sessions
February 1974 (Compliments Of)(3)
One sidenote is that Estribou said he took the band to Western Recording to finish recording for the single. But Blair Jackson suggests that, since Western Recording was actually in Los Angeles, they more likely went to Coast Recorders. This seems to dovetail nicely with Scully’s recollection that the band recorded some demos at Coast, though with Estribou at the helm rather than Healy.
(The Scorpio sessions are covered in more detail in the Taping Compendium vol. I p. 110-112, and the book Grateful Dead Gear p. 36-38.)(2)

Email ThisBlogThis!Share to TwitterShare to FacebookShare to Pinterest
Labels: W-Venues